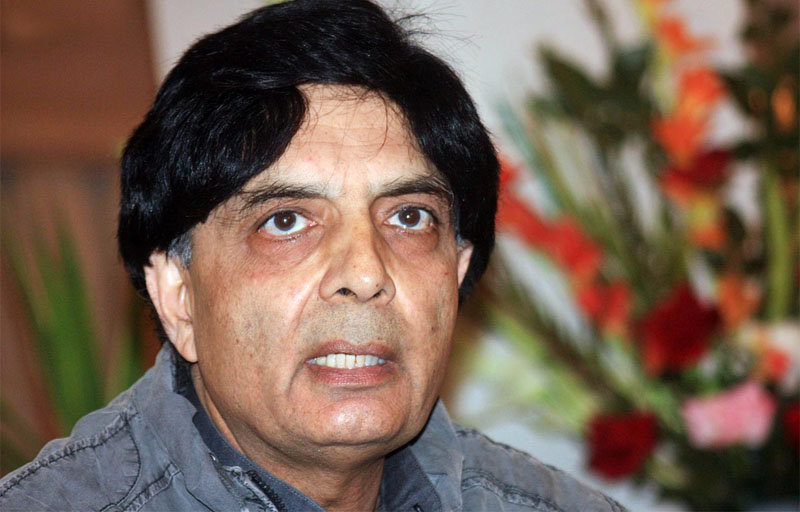 Interior Minister Chaudhry Nisar Ali Khan has called for international unity against terrorism and urged the West to stop linking Islam with terrorism. Speaking at the International Institute for Strategic Studies here on Wednesday, he said: “Islam is opposite of terrorism and those who do not know should read about the religion. Islam teaches tolerance and is a religion of peace and coexistence. Terrorists quote religious teachings out of context and are misusing the message of Islam. They have their own distorted and warped understanding of the religion.” The minister said it was a positive aspect of the recent Washington summit that President Barack Obama made a brave speech categorically stating “we must not connect Islam and terrorism”. Chaudhry Nisar said: “We need to close ranks behind the message of President Obama to strengthen international unity against terrorism.” He said the Muslim community stood against the shooting incident at a magazine office in Paris, but the French publication responded by publishing the same sketches again, further exacerbating divisions. The minister said Pakistan had been having problems with militancy and extremism since the Afghan war, but in 1990s the democratic governments successfully grappled with the fallout of that war and Pakistan’s return to normalcy and peace existence had almost been achieved.

“There were no incidents of terrorism and suicide bombings before 9/11, except occasional cases related to sectarianism, but 9/11 brought a sea change.” He reminded that the 9/11 tragedy had no connection with Pakistan, but the entire fallout and backlash fell on it and Afghanistan. He said Afghanistan even at that time was ungovernable, but Pakistan was a peaceful and democratic country, but then Pakistan was hit by a big storm. Pakistan lost 50,000 lives in terrorism and no marketplace, mosque, school and church were sacrosanct for the terrorists for 13 years, he added. Chaudhry Nisar said the task of the present government was to form a coherent security policy in consultation with political parties, cabinet and military. “Within a span of seven months we put in place a mutually agreed document of internal security policy with onus on the government and the interior ministry.” He said 33 intelligence agencies were working in Pakistan, but there was no intelligence-sharing and coordination among them. “Our main focus was to improve intelligence-sharing. We did monumental work to bring intelligence outfits closer so they share information.

There is a lot of work that needs to be done for institutional building.” The minister said a lot of intelligence was shared with the provinces before major terrorist attacks and “now we have integrated security mechanism and intelligence agencies work under the interior ministry so that we can go forward in the war of terrorism”. He said: “We are moving forward with full political consensus on the National Action Plan to counter terrorism and hate speech. We are also embarking on madressah reforms.” Chaudhry Nisar said over the past 14 years, incidents similar to the attack on Army Public School in Peshawar had taken place and in one of the attacks 125 women and children were killed in Meena bazaar in Peshawar. He said more than 99.9 per cent people killed in terrorist attacks in Pakistan were Muslims while 99.5pc of thousands killed in such attacks in North Africa, Middle East and South Asia in the past 15 years were Muslims. “Hence Islam should not be bracketed with terrorism,” the interior minister said.

Uzair Not Yet Produced in Dubai Court’

Uzair Not Yet Produced in Dubai Court’