At Least 40 Killed in Bus, Truck Collision in Tanzania 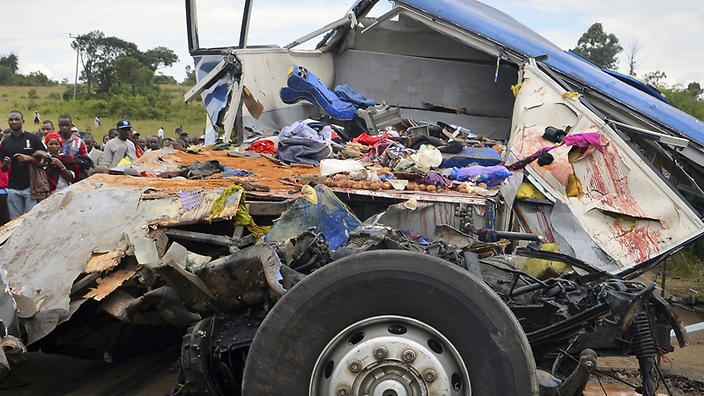 At least 40 people were killed and 23 seriously injured on Wednesday in a collision between a bus and a truck in central Tanzania, officials said.

A statement from the president’s office said the packed passenger bus was travelling between the western town of Mbeya and the economic capital and coastal city of Dar es Salaam when it was crushed by a container truck travelling in the opposite direction. “The container fell on the bus… when the truck carrying the container swayed while attempting to avoid potholes along the road,” said regional police commander Ramadhani Mungi, suggesting reckless driving was the cause of the road disaster. He said at least 40 passengers on the Majinjaa Express-owned bus were confirmed dead, many of them crushed under the toppled container, and that 23 were in a serious condition. Iringa Regional Commissioner Amina Masenza said the bodies had already been moved to a district hospital mortuary, and those with serious injuries moved to a regional hospital.

The accident occurred near Changarawe in the centre of the country, and around 550 kilometres (350 miles) west of Dar es Salaam. “This gives cause for great mourning. The entire country has been shaken,” the east African nation’s President Jakaya Kikwete said in a statement. Serious road accidents are common in the region, due to overloaded and poorly-maintained vehicles, excessive speeding and poor roads. The accident is the worst to be reported in Tanzania since 2006, when 54 people died when a bus fell off a bridge and into a river north of the town of Arusha. (AFP)