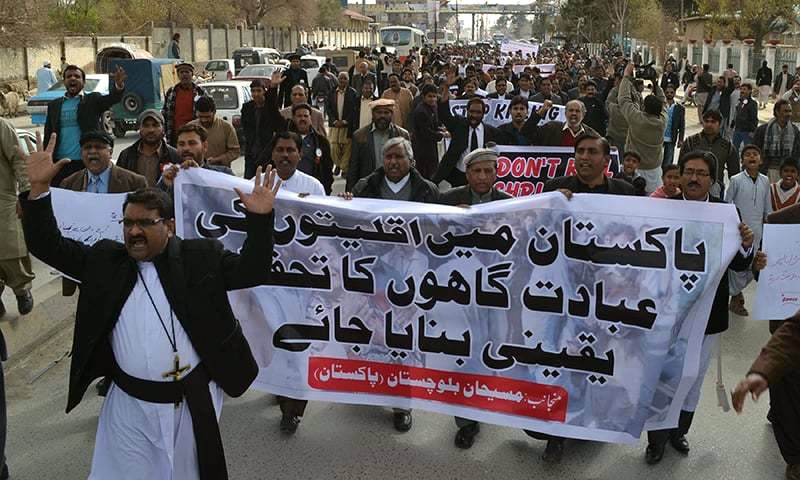 Members of opposition and treasury benches in the National Assembly on Monday said religious minorities are feeling insecure in the country due to the deteriorating law and order situation. “Government has failed to control terrorism as militants are able to strike at any place”. The terrorists carried out suicide attack on churches to defame Pakistan, he added. Muttahidda Qaumi Movement (MQM) lawmaker Syed Asif Hasnain said the terrorist attacks on minorities are damaging the image of the country, while the people have started to believe that Pakistan is no more a secure country for the minorities. Jamiat Ulema-i-Islam-Fazl (JUI-F) legislator Asiya Ansar said it was the responsibility of intelligence agencies to counter such heinous plans as people have been facing terrorism for over a decade now. She said minorities are feeling insecure in their own country. “People believe they will fail to get justice that’s why they are taking law in their own hands,” the JUI-F MNA said.

Ruling party’s MNA Khalil George demanded of the government to establish a separate task force to protect worship places across the country. “The media should call those as ‘martyrs’ who lost their lives in the terrorists attack in Lahore,” he requested.

Lawmaker from Pakistan Muslim League-Nawaz (PML-N) Dr Darshan Punshi said religious minorities should refrain from violence in such difficult situations. He urged the government to compensate families of the victims on a priority basis. Jamaat-i-Islami’s Ayesha Syed said, “It is the responsibility of the government representatives to play its role in countering terrorism.” Sanjay Parwani of MQM said the government should provide jobs to family members of the victims along with compensation. Awami National Party’s Ghulam Ahmed Bilor said religious scholars should play an active role in promoting peace and harmony according to the teachings of Islam. Pashtoonkhwa Milli Awami Party (PkMAP) Chairman Mehood Khan Achakzai urged the government to initiate talks with Afghanistan.

He was of the view that government should call a special session of Parliament, where politicians, military officials, judges and media persons are also summoned to form an agenda to counter terrorism. “We are in a situation of war and we are responsible for it because we used religious seminaries to fight against Russia in Afghanistan but it’s the right time to close this chapter. We should ask the teachers of these religious seminaries to focus only on education,” the PkMAP chief said. Achakzai also informed the Lower House that hundreds of Nato containers are looted by unknown culprits on their way from Karachi to Chaman.