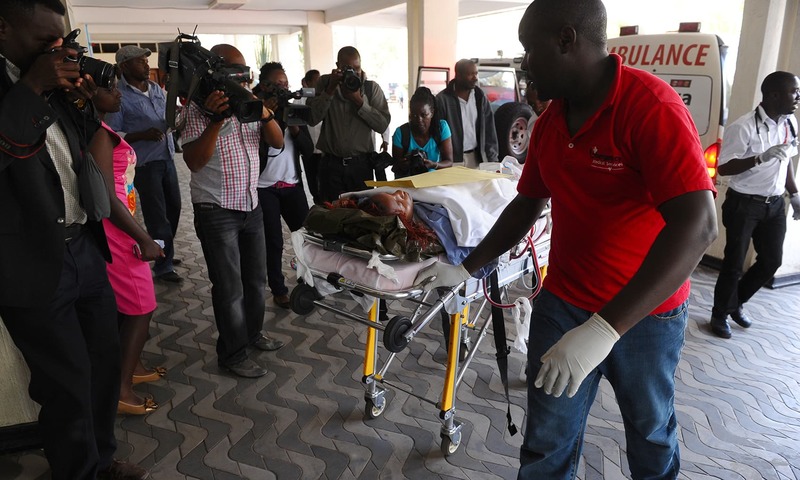 At least 147 students were massacred when Somalia’s Shebab group attacked a Kenyan university on Thursday,

The national disaster operations centre said after the deadliest attack in the country since US embassy bombings in 1998. There are “147 fatalities confirmed in the Garissa attack,” the centre said in a statement. “The operation at Garissa University College has ended, with all four terrorists killed,” the centre said, with the attack lasting some 16 hours from before dawn until well after dark. Masked gunmen stormed the university in the northeastern town of Garissa as students were sleeping, hurling grenades and shooting dead others, before setting Muslims free and holding Christians and others hostage. At least 79 people were wounded in the assault, which lasted for some 16 hours from when the first grenades were used before dawn to blast open the gates of the university, near the lawless border with war-torn Somalia.

In the final hour before darkness fell, Kenyan troops stormed the student dormitory where the gunmen were holed up as explosions and heavy gunfire rang out. “We are mopping up the area,” Interior Minster Joseph Nkaiserry told reporters, saying that four gunmen had been killed after Kenyan troops launched an assault on the final building. “Unfortunately, we lost… a number of lives… it is in the region of 70 students, and 79 have been injured, nine of them critically. “It is the deadliest attack in Kenya since the 1998 bombing of the US embassy in Nairobi by Al-Qaeda, when 213 people were killed. “The terrorists, 90 percent of the threat has been eliminated… we have been able to confirm that four terrorists have been killed,” Nkaiserry added, saying that troops were scouring the campus as the total number of gunmen was not known, but that the main operation was over. A $215,000 (200,000 euro) bounty was offered for the capture of alleged Shebab commander Mohamed Mohamud, a former Kenyan teacher believed to now be in Somalia and said to be the mastermind of the Garissa attacks.

The garrison town is around 150 kilometres (90 miles) west of Somalia and has in the past been targeted by militants from the Shebab. Police chief Joseph Boinet said “the gunmen shot indiscriminately” after storming the compound. The sprawling campus on the outskirts of town has both teaching areas as well as residential blocks. The university has several hundred students from different parts of Kenya.