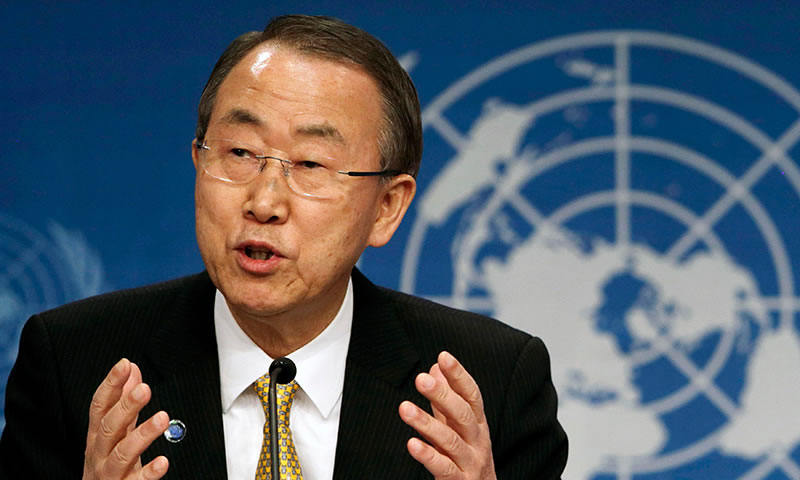 United Nations Secretary-General Ban Ki-moon called Thursday for an immediate ceasefire in Yemen to spur peace talks and get lifesaving aid into the impoverished Middle East nation. The UN chief addressed “the many fateful challenges” the world confronts, from 50 million refugees and displaced people —the largest number since World War II—to the urgent problem of climate change in a speech at the National Press Club. “Millions of people face hatred and persecution, billions suffer from hunger and exploitation,” he said. “The United Nations has appealed for $16 billion to cover humanitarian relief for this year —almost five times what we needed a decade ago.” Ban announced he will visit the Vatican later this month to meet with Pope Francis and discuss “common concerns,” including the encyclical on the environment that the pontiff plans to issue in the months ahead. He said he has invited the pope, President Barack Obama and all other world leaders to the United Nations in September to adopt new UN goals for 2030 to protect the environment, combat poverty and promote human rights and economic development that doesn’t contribute to climate change.

Surveying the crisis-ridden state of the world and the “many fateful challenges on our plate,” Ban pointed to the ever-worsening “nightmare” in Syria, now in its fifth year, and said his envoy Staffan de Mistura will be holding a series of talks in Geneva to see if anyone is “truly serious” about engaging in meaningful negotiations to end the conflict. He made a special plea for Palestinians in the Yarmouk refugee camp caught between the Syrian government’s “military machine … and the brutality of extremist groups.”

Ban said Yemen is “in flames,” and UN-brokered talks offered “the best way out of a drawn-out war with terrifying implications for regional stability.” He made no mention of Wednesday’s announcement that his special envoy for Yemen, Jamal Benomar, was stepping down. Ban said the UN is working on a plan of action, which will be launched in autumn, to fight violent extremism by the self-styled Islamic State group, Boko Haram and al-Qaeda-linked groups such as al-Shabab in Somalia. On Nigeria, he expressed hope that the country’s new government, led by President-elect Muhammadu Buhari, can promote “a return to normalcy” and rescue schoolchildren kidnapped and mistreated by Boko Haram. In South Sudan, where a civil war continues despite ceasefires, Ban said UN bases are sheltering 115,000 people, “a landmark in our efforts to protect civilians.”

The UN chief welcomed the framework agreement between six major powers and Iran to rein in its nuclear program and said the UN would do its best to help implement a comprehensive agreement once it is finalised. “This breakthrough can also create space for efforts to address the many other serious security challenges in the region,” he said. Earlier on Thursday, Ban met with US Defense Secretary Ashton Carter and members of the Senate Foreign Relations Committee.