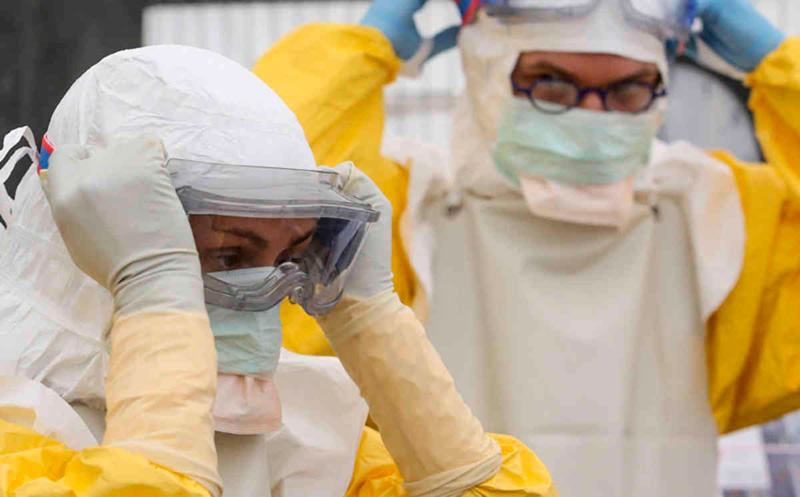 The World Health Organization on Tuesday unveiled a plan to eradicate the deadly Ebola virus, aiming to identify and isolate the dwindling number of new cases by the end of May.

In its new plan, the UN health agency stressed the importance of maintaining the massive efforts to rid the worst-affected nations — Guinea, Liberia and Sierra Leone — of the viral disease, cases of which have already fallen sharply. “There is still a considerable effort required to stop all chains of transmission in the affected countries, prevent the spread of the disease to neighbouring countries and to safely re-activate life-saving essential health services,” WHO said. According to the latest numbers, around 26,300 people have so far been infected with the virus, and nearly 10,900 of them have died. The WHO’s 28-page Strategic Response Plan announced Tuesday is a follow-up on the roadmap it launched last August as the Ebola virus began spreading exponentially.

At the time, just over 3,000 cases and 1,500 deaths had been tallied, but the UN agency warned the caseload could top 20,000. While those fears have been surpassed, WHO said Tuesday that the unprecedented global push to rein in the virus had proved successful. In recent months only a few dozen new confirmed cases have been registered each week, compared to the peaks of over 800 cases per week in October. Liberia, once the hardest-hit country, has reported no new cases of Ebola since the end of March, and appears to be on track to be declared Ebola free in early May.

Read More: More Than 26000 Infected with Ebola: WHO

But the WHO has warned that the fight will not be over until the deadly virus has been completely eradicated. It said case numbers had “plateaued… due to persistently high transmission in the western areas of both Guinea and Sierra Leone.” Limiting the spread of the virus in the coastal areas of the two countries before the rainy season’s imminent onset was crucial, it said. Among the concerns still plaguing the two countries are continued “Ebola deaths in the community and numerous instances of unsafe burials” of the highly contagious bodies, WHO said.

A number of new cases are also popping up among people not known to have been in contact with previous cases, or who cannot be linked to known chains of transmission, it warned. “The priority is to identify and isolate all new cases by the end of May, and to confirm that they have come from known transmission chains and contact lists,” the WHO plan said. Maintaining capacity at a district, national and regional level, and continued vigilance globally was also important, it said. – AFP