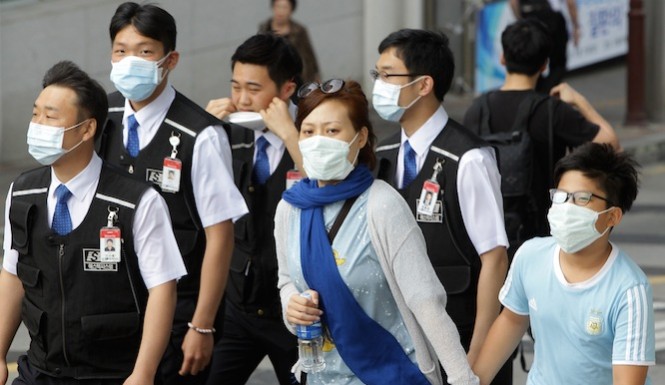 South Korea reported Monday its 16th death and five new cases in the growing outbreak of MERS which has placed more than 5,200 people under quarantine and sparked widespread alarm.

The death of a 58-year-old man put the total number of fatalities from Middle East Respiratory Syndrome at 16 since the outbreak began less a month ago.

The victim had diabetes, the health ministry said in a statement. The total number of cases — including the 16 deaths — rose to 150, it said, adding 17 patients were in unstable condition. The five new patients — aged from 39 to 84 — were infected in hospitals in cities including Seoul and Daejeon, 140 kilometres (90 miles) south of the capital. Among them was a nurse who had performed CPR on an infected patient in Daejeon and one infected in Samsung Medical Centre in Seoul — the epicentre of the outbreak where more than 70 patients, visitors and medical staff contracted the virus. The outbreak — the largest outside Saudi Arabia — started on May 20 when a 68-year-old man was diagnosed after returning from a trip to Saudi Arabia.

Since then the virus has spread at an unusually rapid pace, sparking alarm in Asia’s fourth-largest economy. Almost all patients were infected in hospital. The Samsung hospital — one of the country’s largest — suspended most services Sunday to help curb the spread of the potentially deadly virus. In Saudi Arabia, more than 950 people were infected and 412 died from the disease. There is no vaccine for MERS which has a mortality rate of 35 percent, according to the World Health Organization. – AFP

Mother and Daughter, 12, Dismembered in Mexico

Mother and Daughter, 12, Dismembered in Mexico