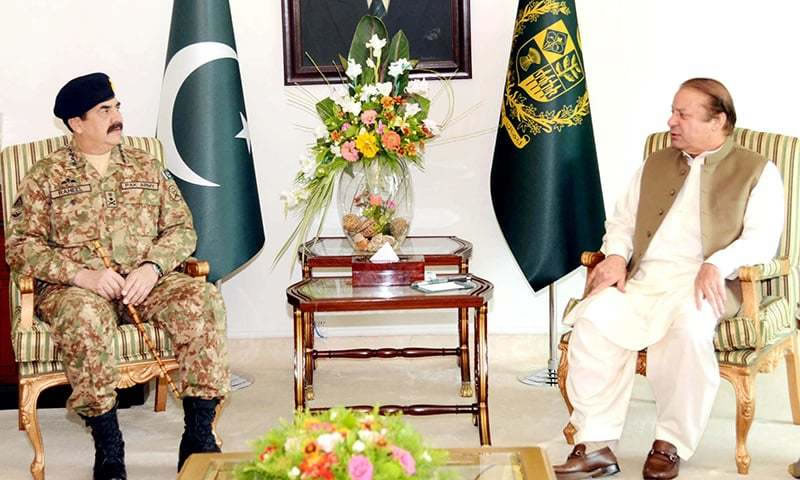 Prime Minister Nawaz Sharif reaffirmed on Tuesday his support for military-led “actions against criminals” and gave his assent for taking the fight against terrorists to urban centres.

During a meeting with Army Chief Gen Raheel Sharif, the prime minister emphasised on consolidating the achievements made during the operation Zarb-i-Azb, which is set to enter next phase in July.

The meeting, according to the Prime Minister’s Office, was held to review the progress in Zarb-i-Azb and the internal and external security situation in the country. “It was decided that operation against criminals and terrorists would continue unhindered across the country. It was reiterated that Zarb-i-Azb would be taken to its logical conclusion, regardless of the cost, and terrorists and criminals would be hunted down indiscriminately,” the PM Office said. Reiteration of the commitment to fighting terrorism has regularly been expressed in statements issued after similar security meetings held in the past. But reference to actions against criminal elements under the military’s watch has been made for the first time.

A source in the PM Office said the comment “action against criminal elements” was in response to PPP Co-Chairman Asif Ali Zardari’s tirade against the army which had been accused by him of overstepping its mandate. The angry remarks by the former president came after Sindh Rangers had raided the offices of Sindh Building Control Authority and seized records of land allegedly illegally allotted to influential individuals, and a statement by Rangers Director General Maj Gen Bilal Akbar claiming that Rs230 billion collected annually in Karachi through illicit means, including land-grabbing and illegal allotments, was channelised to fund criminal activities and terrorism.

Prime Minister Sharif had in an earlier statement denounced Mr Zardari’s comments, but it was the first time that he explicitly backed action against ‘criminal activities’. The source said there was also agreement about launching clean-up operations in the urban centres against militants and extremists. The army chief previously said that successes in the operation Zarb-i-Azb had set the base for action against militants and their sleeper cells in towns and cities. The operations in urban areas will be intelligence based against designated targets.

The military has also been contemplating expansion in the scope of intelligence-based operations (IBOs) which are often cited as a major success story over the past year and have helped in pre-empting the backlash of the operation in North Waziristan. About 218 hardcore terrorists are said to have been killed in over 9,000 IBOs conducted by the military over the past 12 months in collaboration with intelligence agencies and other law-enforcement agencies. Prime Minister Sharif, in a word of appreciation for the military, said the entire nation was standing by the armed forces in this war.