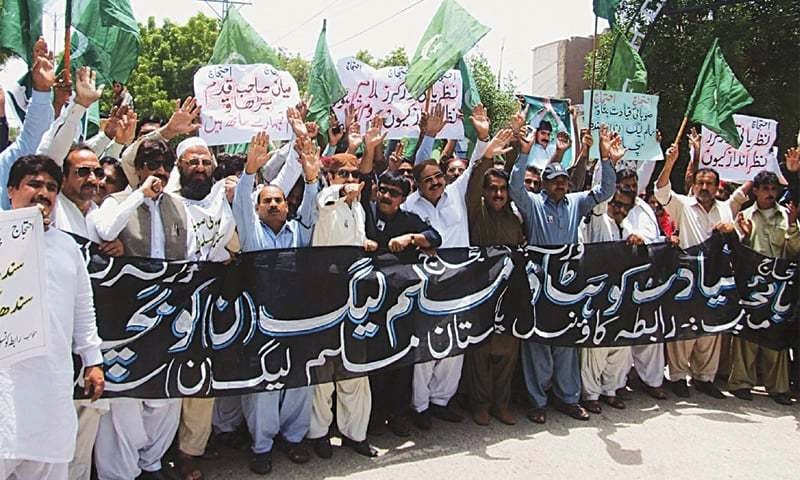 Serious differences between two top leaders of the Sindh Pakistan Muslim League-Nawaz (PML-N) and their senior colleagues came to light on Sunday when the latter held a press conference to demand removal of the former.

Anwer Khan Marri, Abdul Hameed Khoso, Raja Abdul Haque called for removal of the party’s Sindh chief, Ismail Rahu and senior vice president Shah Mehmood Shah. They also demanded an end to what they described as President Mamnoon Hus­sain’s interference in the internal affairs of the party’s Sindh chapter. The other demands they made included “due status” for senior party leaders and workers and resolution of their genuine issues. They said they intended to hold sit-ins in Karachi, Islamabad, Lahore and other places if their demands were not heeded by the party’s central leadership. “Mr Rahu and Mr Shah had been installed without merit while the senior leaders and activists from Sindh who had rendered great sacrifices during the period of oppression let loose by the 1999 military coup leader,

Gen Pervez Musharraf had been ignored, Makhdoom Hussain said. He said great unrest prevailed in the leadership and cadre of the Sindh PML-N over various issues, including meddling in its affairs by the country’s president. He appealed to the party chief, Prime Minister Nawaz Sharif, to look into the provincial chapter’s grievances and order reorganisation the party in consultation with the senior cadre. Earlier, the dejected leaders and workers staged a sit-in outside the press club and raised slogans against “Mam­noon League”, Mr Rahu and Mr Shah. The protesters hailed from Matiari, Mirpurkhas, Sanghar, Badin, Tando Moh­ammed Khan, Tando Allahyar, Jamshoro, Dadu, Naushahro Feroze, Umerkot and Karachi.