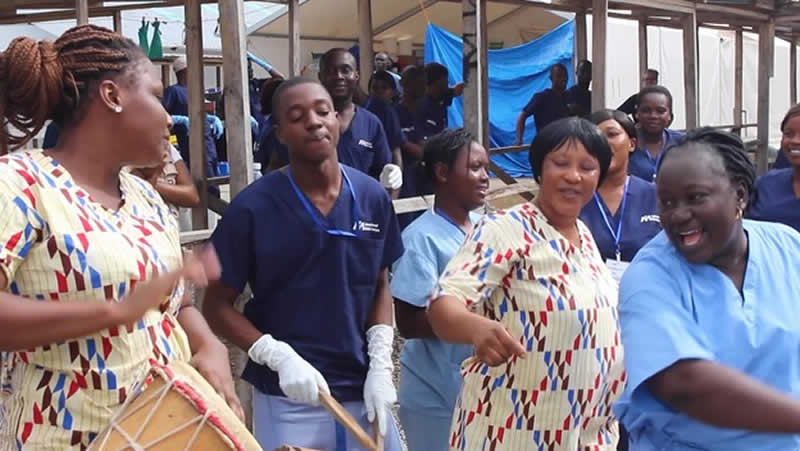 With no new cases reported in two weeks, Sierra Leone joins neighbouring Liberia in the countdown to being declared Ebola-free, with Guinea the only country where people are still falling sick with the deadly tropical fever.

The World Health Organisation says a country can be declared Ebola-free 42 days after the last confirmed case has tested negative twice for the virus. The release of the cured patient was celebrated by crowds dancing in the streets, beating drums, cars honking their horns and radio and television stations playing the national anthem. Sankoh said she would “from now on be the number one messenger to sensitise people that although Ebola is on the run, vigilance should be the watchword.” She appealed to “government not to forget all Ebola survivors as most of us are now very vulnerable in terms of economic wellbeing.” National Ebola Response Centre coordinator Steven Gaoja said the patient’s discharge from hospital “represents a significant milestone in the fight against Ebola and the countdown towards a resilient zero.” According to the health ministry, only 14 people are now in quarantine nationwide. Since first emerging in December 2013, the worst outbreak of Ebola in history has infected nearly 28,000 people and left some 11,300 dead — mostly across Sierra Leone, Liberia and Guinea.

The disease can cause fever, vomiting, diarrhoea, kidney and liver failure, and internal and external bleeding. There is currently no licensed cure or treatment. Sierra Leone had its first case in May 2015 after a woman tested positive on her return home from a funeral in Guinea. Some 4,000 people have since died in the country. Ebola has brought the three nations to their knees, devastating their economies to the backdrop of apocalyptic scenes as infectious bodies at times lay in the streets and entire communities were quarantined. The WHO has said that if current efforts to root out new cases are kept up, the epidemic could be over by the end of the year. But the organisation has warned against a “false sense of security” as even a single undetected case could ignite a major flare-up. Liberia was declared Ebola-free in May, but six new cases cropped up a month later, all of whom have now been cleared. Guinea, the epicentre of the outbreak, has struggled the most to bring the epidemic under control, and has battled distrust and suspicion from locals who believe the disease is a “white conspiracy”.

The WHO also believes the numbers of cases and deaths have been vastly underestimated due to families hiding the sickness and burying relatives before they can be tested. Closer than ever to being declared Ebola-free, the affected countries are taking grim stock of the devastation wrought on their economies as key mining and agricultural activities ground to a halt. Sierra Leone said Saturday that gold exports had plunged by two-thirds and diamond exports nearly halved in the first half of 2015. The country’s economy was booming with 11 percent growth in 2013 but is expected to contract by two percent this year, according to the World Bank. The outbreak has also killed some 500 health workers in countries whose health systems were already in dire straits, battling high maternal mortality and rife diseases like malaria. The survivors are mourning entire communities wiped out while some 13,000 struggle with long-term complications such as severe joint pains and visual impairments that can lead to blindness. –AFP