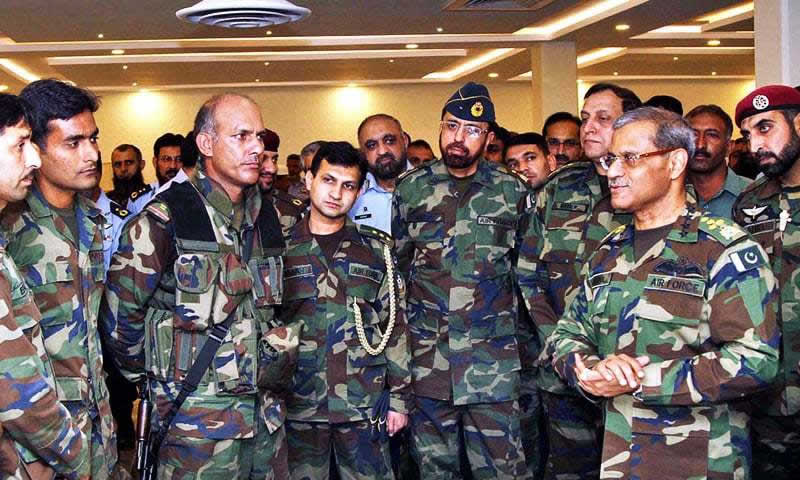 Chief of Air Staff, Air Chief Marshal Sohail Aman, said on Monday that nobody could defeat the courage and valour of Pakistani nation.

Recalling the valiant response of airmen to the terrorist attack on the Pakistan Air Force’s Badaber camp on Friday, he said, “Our spirit is the same and our response (to any such assault) will also be the same. No one can match our spirits”.

“It should be clear to everyone that this is the nation nobody can defeat,” he said while addressing the PAF personnel during a visit to the Badaber camp. The air chief met the PAF personnel, offered Fateha for the victims of Badaber attack and praised the airmen who bravely fought without budging an inch from their place of duty during the assault, according to a press release issued by the PAF. “I am proud that no one hesitated for a second to fight the assailants,” he said. “They completed the operation with sound professionalism and unwavering commitment.”

He praised the coordinated effort made by the PAF, Pakistan Army and law-enforcement agencies to thwart the dastardly attack. “They displayed an example of bravery, faith, conviction and love for the country.” About the terrorists, the air chief said that young minds had been brainwashed and used as a tool by the enemy to harm Pakistan, adding that they would never let it happen. Air Chief Marshal Aman reiterated his resolve to fight against the menace of terrorism and said that each officer and airman was ready to sacrifice his life for the country. “Our adversaries should have no doubt that we will never let them succeed in their nefarious designs and the PAF will do whatever it takes to achieve this aim,” he added.