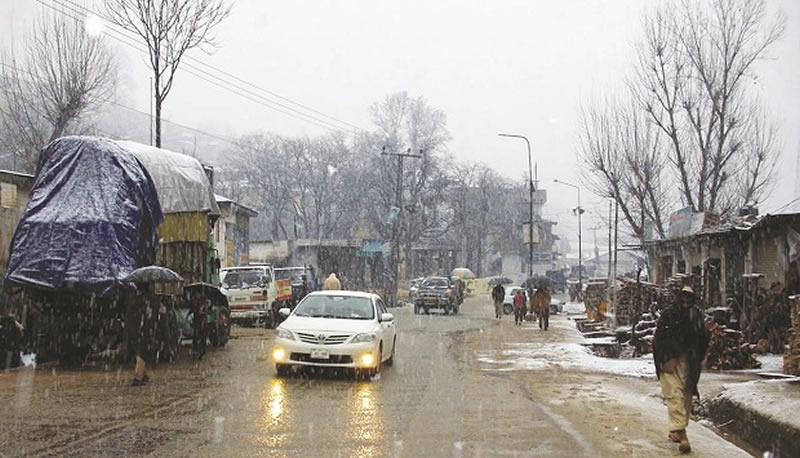 Heavy rain lashed different towns and cities of Punjab, upper parts of the country and Azad Kashmir on Tuesday. In Punjab, a woman died and 29 other people suffered injuries when roofs of their houses collapsed.

Heavy to very heavy rain was also reported over the catchments of eastern rivers and the Flood Forecasting Division said high to very high flood was expected in rivers Jhelum and Chenab over the next 24 hours.

But it said the monsoon dep­ression which had lost its severity and became a well-marked low pressure might fizzle out on Wednesday. As a result, the spell of heavy to very heavy rain would be over, said FFD chief Riaz Khan.  But before that, he added, there were ample chances of more heavy to very heavy rain in Punjab, Azad Kash­mir and upper catchments of Chenab and Jhelum, especially on Tuesday late night. There may be even cloudbursts (short duration driving rain) over the upper catchments of Chenab. “The system is moving out. At present it is located over Indian Punjab, east of Lahore. It is expected to be defused by tomorrow (Wednesday) afternoon,” Mr Khan said. According to Rescue 1122, Gul Bibi, 45, of Sabzazaar’s Dubbanpura locality, died when the roof of her house caved in during heavy rain in Lahore. Her three children were injured. Six people were injured in Nawab Town and four in Sha­hdara Town after the roofs of their houses collapsed. Our district correspondents said that eight people, four women among them, were injured in Vehari and four each in Gujranwala and Bahawalpur in similar incidents. Meanwhile, rain which started in the wee hours of Tuesday continued to lash Lahore almost the entire day.

It was particularly heavy in the morning and in the early afternoon. The Met office recorded 145mm of rain at the airport and 64mm at its Jail Road observatory. Streets turned into rivulets and there were massive traffic jams on the flooded roads being repaired or remodelled everywhere in the city. Rain was taken as a bad omen by the sellers of sacrificial animals sitting under the open sky with their stocks. Prices of animals which were skyrocketing until Monday dropped to some extent, but rain kept the buyers at a bay. According to the Met office, Bahawalnagar received 110mm of rain, Okara 100mm, Bahawalpur 87mm, Sahiwal 84mm, Shorkot 66mm, Sialkot 60mm, Faisalabad 57mm, Mangla 82mm, Chhor 45mm, Mandi Bahauddin 58mm, Toba Tek Singh 43mm, Jhelum 67mm, Gujrat 50mm, Kotli and Kasur 38mm each, Gujranwala 41mm, Parachinar 35mm, Murree 57mm, Sargodha 45mm, Rawalakot 75mm, Garhi Dupatta 43mm, Kakul 24mm, Muzaffarabad 22mm, Skardu 29mm, Jhang 42mm, Chakwal and Astore 27mm each and Skardu 29mm.