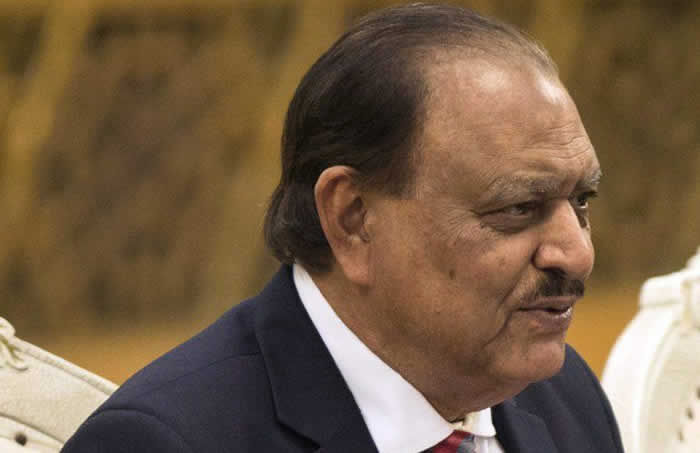 President Mamnoon Hussain has expressed the hope that lifting of international sanctions against Iran will benefit Pakistan and the two countries will enhance their economic and trade ties.

“Pakistan welcomes the framework agreement and Joint Comprehensive Plan of Action on the Iran nuclear deal and hopes that lifting of sanctions against Iran will open new avenues for expanding bilateral trade, investment and cooperation in the energy sector,” he told the outgoing Iranian Ambassador Alireza Haghighian, who called on him on Wednesday.

The president said that there was great potential to increase bilateral trade and the $5 billion target set by both countries would hopefully be achieved in three years. “Pakistan’s priority is to address its energy deficit. Therefore, the country is committed to the Pak-Iran Gas Pipeline project.” He said work on 700km of the pipeline from Nawabshah to Gwadar would commence shortly and would be completed after the removal of the sanctions imposed on Iran. Pakistan, he said, was keen to import electricity from Iran by expanding current projects as well as initiating new ones. President Hussain emphasised the need for close cooperation between the two countries to bring peace to the region.

He underlined the need for greater cooperation between both countries at international forums for achieving shared objectives. He asked the ambassador to convey an invitation to Iranian President Hassan Rouhani to visit Pakistan soon. In a separate meeting, Minister for Petroleum and Natural Resources Shahid Khaqan Abbasi briefed the president on the liquefied natural gas project. The president praised the transparent nature of the project and said work on such low-cost and beneficial plans should be expedited to meet the country’s energy needs.