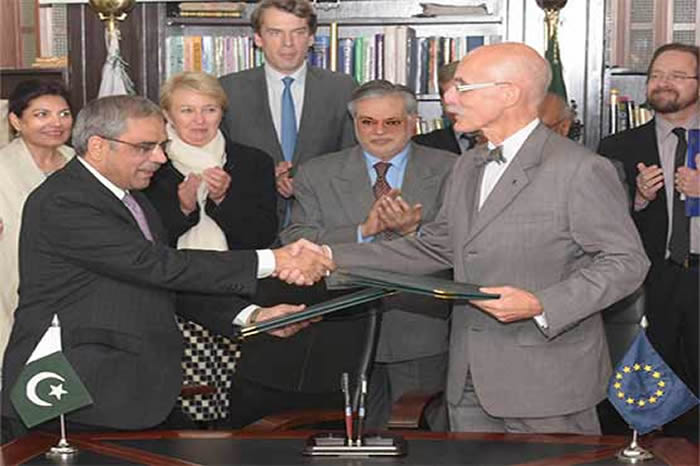 European Union (EU) inked the Memorandum of Understanding (MOU)on Tuesday to provide millions of Euros’ loan to eliminate poverty from Pakistan. According to the details, European Union will provide assistance of six hundred and fifty three million Euros to Pakistan for rural development, education and reduction of poverty.

A Memorandum of Understanding to this effect was signed in Islamabad, according to it EU will provide the loan on easy terms.

Talking to media on the occasion, Finance Minister Ishaq Dar appreciated the EU for extending the support to Pakistan for poverty alleviation. He said that this assistance will help the government in meeting the sustainable development goals recently adopted by the United Nations (UN). He said the EU assistance will particularly cover the areas of Khyber Pakhtunkhwa (KP), Sindh and Balochistan provinces. Ishaq dar said that government has increased the budget of Benazir Income Support Program as well to eliminate poverty.

The step was taken in bid to enlist more processing plants by the EU. The administration has asked Fisherman’s Cooperative Society (FCS) to expand K-I hall and install sliding-mesh rollers in the given time. Federal Minister for Ports and Shipping had urged the Sindh government to take notice of the matter and have the tasks completed without any delay. The ministry had dispatched a letter to the provincial government in this regard.

EU Food and Veterinary Office had identified serious issues with the sea food including hygiene that resulted in a ban by Pakistan s competent authority. More than 1,500 fishermen have been trained while at least 300 boats revamped in bid to revive the trade. In the past three years, EU has spent at least 15 million Euros to promote trade with Pakistan. In May this year, ban on two traders were lifted while five other names were forwarded to the EU in this regard.

Thai Man May Go to Prison for Insulting King’s Dog

Thai Man May Go to Prison for Insulting King's Dog