Rangers, Police Say They killed 696 Suspects In ‘Encounters’ In 2015 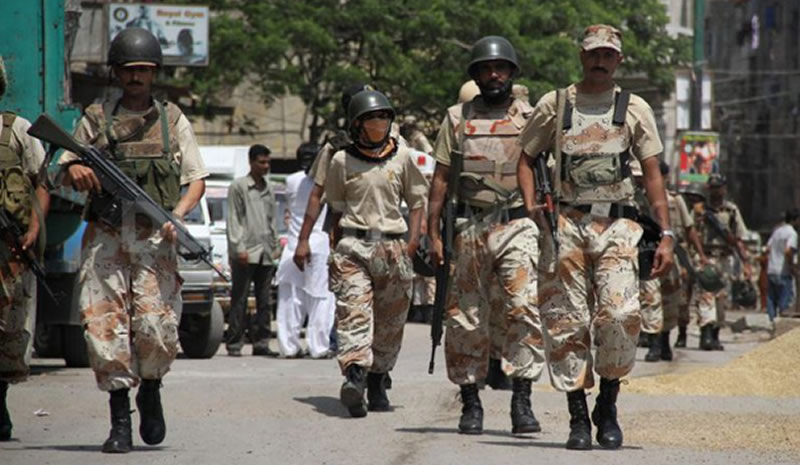 Police and Rangers killed 696 suspects in different encounters in the metropolis during 2015 and the collective number of their personnel who fell in the line of duty during the same period is 95.

According to the data released by the Karachi police on Monday, a total of 1,577 encounters took place during 2015 and 544 suspected militants, gangsters, criminals, etc were killed.

The number of policemen who lost their lives in armed attacks so far is 83, while 89 were wounded in the outgoing year. In their annual performance report, the Rangers said that in 69 ‘encounters’ a total of 152 “hardened criminals and terrorists” were killed during 2015. A spokesman for the paramilitary force said that 12 Rangers personnel lost their lives in armed attacks and 20 were wounded in different actions during the outgoing year. The killings in encounters are marred by allegations of human rights abuses by the rights groups, which also consider such incidents ‘extrajudicial killings’.

However, the figures of the suspects killed in encounters and of the law-enforcers targeted in 2015 are notably less than the numbers of 2014. In 2014, a total of 925 suspects were killed in such shootouts and 160 personnel of police and Rangers — 143 policemen and 17 Rangers — had fallen victim to targeted killing. In the previous year, 701 suspects were killed in ‘encounters’ with police and 224 were gunned down in shootouts with the paramilitary Rangers. The total number of suspects held on different charges by the police and Rangers during 2015 was 10,961.

While the Rangers claimed that they had arrested 4,074 suspects in total 2,410 operations across the metropolis in the outgoing year, about half of them were not charged with any crime. The Rangers spokesperson said that 2,198 suspects (out of 4,074) were handed over to the police for prosecution. Of them, a total of 1,301 suspects were allegedly involved in terrorism cases (887), targeted killing (268), extortion (97) and kidnapping for ransom (49). A police spokesman said that around 6,887 suspects were arrested during the outgoing year. However, the official did not mention the number of those charged with any crime.

The lack of transparency about the number of people picked up or later let off worried the Human Rights Commission of Pakistan. “We just get the tally of the number of people arrested but not whether they have been eventually released and on what grounds,” HRCP chairperson Zohra Yusuf told Dawn earlier According to police figures, the number of people killed in targeted attacks during 2015 was 986. In 2014, a total of 1,925 people lost their lives in targeted attacks. During the outgoing year, the police and Rangers seized a total of 6,038 weapons including sub-machine guns, light-machine guns, sniper rifles, G-3 rifles, rockets, grenades, pistols, etc.