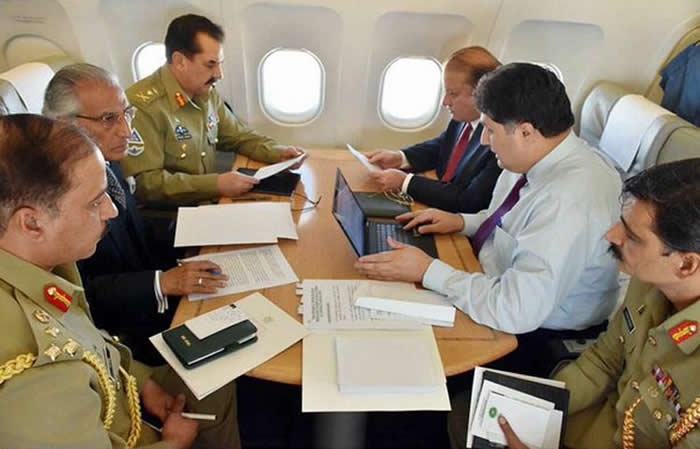 As Prime Minister Nawaz Sharif and Army Chief Gen Raheel Sharif embarked on a two-day visit to Saudi Arabia and Iran, their focus on the first leg of the trip looked to be on participation in a ‘counter-terrorism coalition’, even though the trip was billed by both the government and military as a mediation effort.

In Riyadh, the PM and army chief held talks with Saudi King Salman bin Abdulaziz Al-Saud. The army chief separately also met Saudi defence minister Mohammad bin Salman. The government, while announcing the visit, had indicated that the visit was being made out of concern over the escalation of tensions between Saudi Arabia and Iran. But from the Prime Minister Office’s statement on the meetings in Riyadh it looked as if the emphasis was on bilateral relations and Pakistan’s participation in the 34-nation ‘counter-terrorism alliance’, set up by Saudi Arabia. The mediation initiative, meanwhile, appeared to have been relegated down the priority list, with the PM offering Pakistan’s good offices for the resolution of the Saudi-Iranian row.

“During the talks, both sides underscored the need for further strengthening of bilateral relations in all fields, including defence, security, economic and commercial cooperation,” the PM’s Office said in a statement, filled with familiar platitudes about the reverence in Pakistan for the king and the cultural, religious, and historical ties between the two countries.  The statement further said that during the talks there was discussion on the “various facets of enduring cooperation” between Saudi Arabia and Pakistan under the counter-terrorism coalition. Saudi Arabia had, last month, announced a 34-nation alliance to fight terrorism. Even though Pakistan seemed to have been caught unawares about the setting up of the coalition it had officially agreed to join it. Pakistan’s role in the coalition is still not clear despite some hints by the government that it will be limited to providing military hardware, training of security forces of participating countries, intelligence sharing and developing a narrative against terrorism and extremism. At the meeting, PM Sharif shared a broad outline of Pakistan’s participation in the coalition.