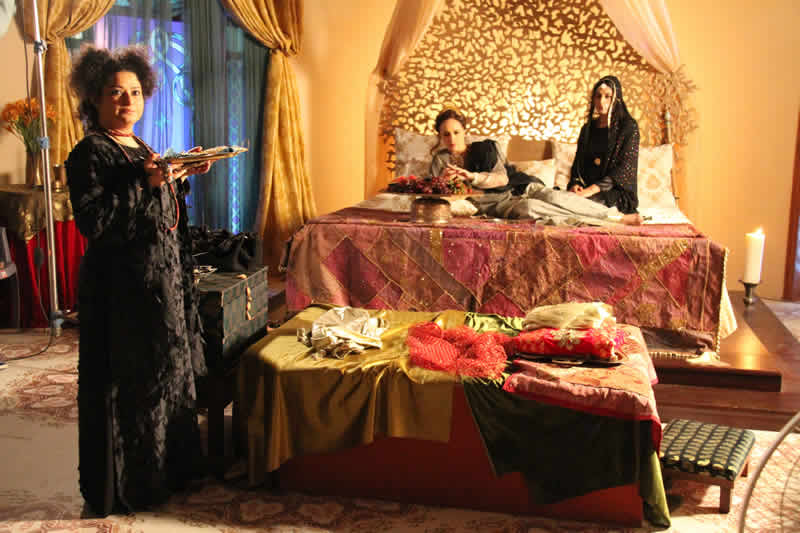 Television and stage veteran Sania Saeed is one of the most outspoken actresses when it comes to the misogynistic depictions of women or “weeping willows” on television, being an active founding member of political theater groups and movements Dastak and Katha respectively. But Saeed is ecstatic about her upcoming role in ‘MorMahal’ the 40 episodic period drama/fantasy serial conceptualized by Imran Aslam; written by legendary poet and writer Sarmad Sehbai; produced by Babar Javed, and directed by Sarmad Sultan Khoosat soon to be aired on GEO TV. “This is the weirdest thing I have ever done!”Saeed enthuses.

“I play an oracle!” An oracle was an entity that parlayed prophecies delivered from a divine source, a type of character that has never been envisioned, let alone portrayed on Pakistani television. Pakistani television is riddled with female characters that are shown to be indubitably dependent on the men in their lives. But Saeed gleefully relates that her character in MorMahal is not buoyed by such draconian limitations. “I have no sons, husbands, son-in-laws or any male relatives who my life revolves around. Thankfully, my character is further unique in that way.

“Saeed’s character is also free from any physical as well as representational barriers. “I tried to bring something new to the table. My voice, my mannerisms- everything is different.” Saeed explained. Saeed adds that all actors would get together during acting workshops and try to conceptualize how they were going to portray their larger-than-life, personae.

“My character is so different from the rest because she doesn’t look, act or dress like any of the other women of this world. I had no restrictions on how to portray her. ” Director Sarmad Khoosat the successful director behind earlier hits Humsafar, Manto says that ‘MorMahal’is essentially a story of fiercely resilient, powerful women.

“There will be no weeping willows here. MorMahal is a ‘once-upon-a-time’, plot driven story. It has costume, drama, music, glitz and glamour and it’s still a relatable story because it boils down to human relationships,”Khoosat concluded adding jokingly that “MorMahal can be called the hilalerotica of Pakistan.”

Set in the fictional state of Jahanabad around 200 years ago in an era fusing Mughal, Greek, Egyptian and Turkish civilizations MorMahal will be the first Pakistani “fantasy drama” to be televised since AlifLaila and AinakWala Jinn almost 25 years ago. MorMahal has also been named as Pakistan’s most expensive television series after GEO TV’s Bashar Momin. MorMahal will air on GEO TV in the third week of March 2016.

Many In US Unaware Of key Facts On Zika Virus Study