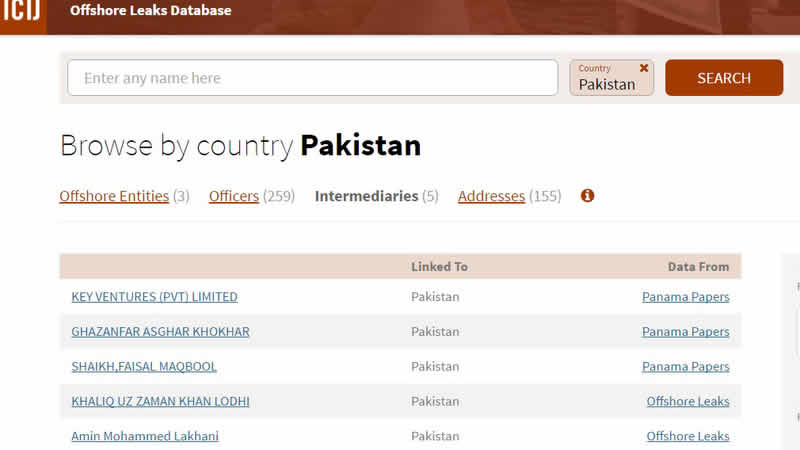 Names of 259 Pakistanis with links to offshore companies have surfaced in one of the world’s biggest ever data leaks through an online searchable database made public by the International Consortium of Investigative Journalists (ICIJ) late Monday evening.

The names in the latest release of documents on the website offshoreleaks.icij.org include:

Mir Shakil ur Rehman had reportedly said that the company was dormant with no money in it. The database contains ownership information about companies created in 10 offshore jurisdictions including the British Virgin Islands, the Cook Islands and Singapore. It covers nearly 30 years until 2010. The database is flooded with traffic from around the world and will take more time to fully sift through. Obaid-Chinoy responded to a request for comment from Dawn by saying, “I fully support ICIJ and the laudable efforts being made by it I would, however, like to clarify that in that my name is not mentioned in the Panama leaks and I am neither the legal nor the beneficial owner of any enterprise mentioned in the Panama Papers.” There is a mention of my mother, Mrs. Saba Obaid (wife of Late S.M. Obaid) and I say with confidence that the off-shore companies mentioned in the Panama Papers as being owned by my mother are compliant with the applicable laws.”

While the fresh digital cache includes the names of members of Pakistan’s business elite, it is not immediately ascertainable whether the documents contain names of political heavyweights like the explosive April 3 Panama leaks that named Prime Minister Nawaz Sharif’s children Maryam, Hassan and Hussain among other world leaders having offshore wealth. The leaks allege that while he was in opposition, Mr Sharif’s children raised a £7 million loan from Deutsche Bank against four flats in London’s Park Lane owned by offshore companies based in the British Virgin Islands. The government has since been locked in a bitter battle of words with opposition parties, who are calling for the prime minister to step down. Mr Sharif and his allies have spent much of the past month engaged in a damage control exercise to plead the innocence of the Sharif family.

The Panama Papers, a massive investigation into the secretive offshore companies owned by the world’s political and business elite, sparked controversy in several countries including Pakistan, with Mr Sharif last month offering the formation a judicial commission to probe his family’s alleged links to offshore accounts. The US-based organisation earlier said the fresh release “will not be a data dump'” of the sort the Wikileaks group became known for. But it said the current cache includes 200,000 offshore entities set up by wealthy individuals around the world. The documents are from data given to a German newspaper, Sueddeutsche Zeitung, over a year ago by anonymous source using the name “John Doe”. The data came from nearly four decades of digital archives of one Panamanian law firm specialised in creating and running offshore entities, Mossack Fonseca, which says its computer records were hacked from abroad. While the ICIJ has released this information in public interest, it clearly maintains that it is not suggesting the people or companies included in the ICIJ Offshore Leaks Database have broken the law or acted improperly.

A disclaimer on their website also states “There are legitimate uses for offshore companies and trusts.” However, the network maintains that its release of records will help to “strip away the secrecy of offshore jurisdictions”. Using the offshore economy is akin to acquiring your own island where the rules that most citizens follow don’t apply,” the ICIJ says on its website. According to the initial release of records, other world leaders having offshore accounts included Russia’s president Vladimir Putin, Iceland’s former PM Sigmundur Davíð Gunnlaugsson as well as British Prime Minister David Cameron.