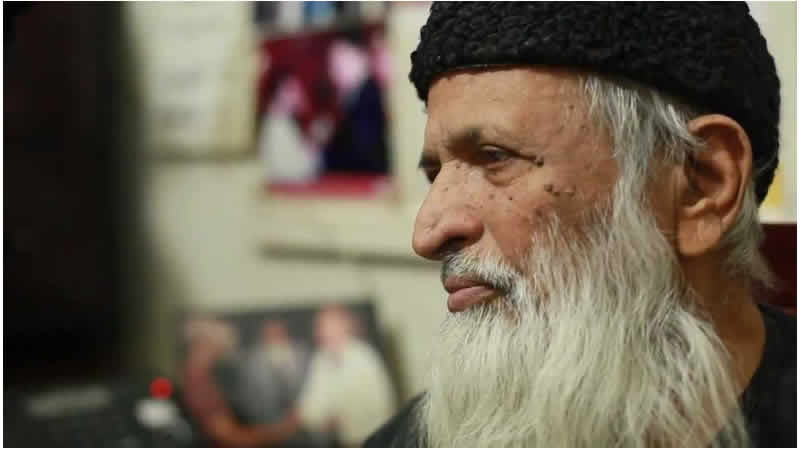 Pakistani celebrities who died in 2016

Human life is mortal. People come and go from our lives. In 2016, we have lost many famous celebrities. Here is a round-up of Pakistani celebrities who passed away this year.

Pakistan’s legendary philanthropist Abdul Sattar Edhi, who devoted his life to the poor and the destitute, died on July 8 at a hospital in Karachi following a prolonged illness. He was 88. Known in Pakistan as “Angel of Mercy” for his social work that also won international acclaim, Edhi had established a welfare foundation almost six decades ago that he oversaw together with his wife, Bilquis Edhi. Thousands of people, including high-profile politicians and government officials, offered funeral prayers for him at the National Stadium. He was laid to rest after state funeral amid a guard of honour and a 19-gun salute by the Pakistan Army.

Sabri shot dead in Karachi on 22 June 2016. He was a noted sufi singer. Son of Ghulam Farid Sabri of the Sabri Brothers, he emerged as one of South Asia’s most prominent qawwali singers, often reciting poems written by his father and uncle. He was shot dead in a targeted killing. His alleged murdered are under police custody where they have admitted the assassination.

Pakistani social media starlet Qandeel Baloch was killed by her brother on July 15. Her brother Waseem confessed to strangling Baloch in a so-called “honour killing”. His trial in the court is in progress. Model Qandeel Baloch, who shot to fame for her provocative selfies, was criticised by detractors who found her posts indecent, but many also praised her for bold videos.

Famous TV personality Naseer Bhai passed away on June 26. He was known as the ‘music encyclopedia of songs produced between 1950 and 1980. Naseer Bhai had been ill for some time and was moved to a Lahore-based hospital where he died. The 61-year-old host was famous for his sharp memory of vintage movie songs, producers, singers and other relevant information.

Stage actress Qismat Baig was shot dead on November 24 in a gun attack in Lahore. Police said she was killed on directives of an influential person. The prime suspect Rana Muzammil, who allegedly ordered the killing, confessed in police custody that his intention was not to kill the stage actress but he only wanted her to be left injured in the firing.

He said he just wanted to ‘teach her the lesson’ after her refusal to perform in a stage drama in Faisalabad. Rana Muzammil is said to be a promoter who organized stage shows.

Pakistan lost Junaid Jamshed after a tragic plane crash on Dec 7. The pop singer turned preacher and his wife were among 47 people who were killed when a PIA flight smashed into a hillside in Abbottabad district while travelling from Chitral to Islamabad. Tributes and condolences poured in on social media as well as on mainstream media over the tragic death that plunged the nation into shock. His body was identified through his facial X-ray a week after the incident. His funeral prayers were offered by thousands of people in Karachi where he was laid to rest.

Pakistan women’s football team striker Shahlyla Ahmadzai Baloch died in a car crash in on Oct 13. She was travelling in her car with her cousin when the vehicle hit footpath and a barrier. The incident occurred near Karachi’s Clifton beach.

Baloch was a talented professional footballer who played as a forward for Balochistan United and the Pakistan national women’s team.

Actress Nisha Malik, whose debut film was slated to be released on Eid ul Azha, was found dead in mysterious circumstances at her Lahore’s residence on September 2. According to her family, Nisha Malik committed suicide by hanging from a ceiling fan. Media reports said she had minor arguments with the family. The deceased was about to start her acting career in the film “Best of Luck” which was released on Eid ul Azha this year. She entered the film industry only eight months before her death.

The actress and heartthrob of yesteryear and ace Pakistani film director, Shamim Ara, passed away in London on August 5 after protracted illness. She was 78. She has been an extremely active, talented and a successful film personality of Pakistan. The Lollywood actress of 50s and 60s, a famous film producer, was under treatment in London since she suffered a brain haemorrhage in 2010. The artiste underwent a brain surgery but did not fully recuperate and went into coma.