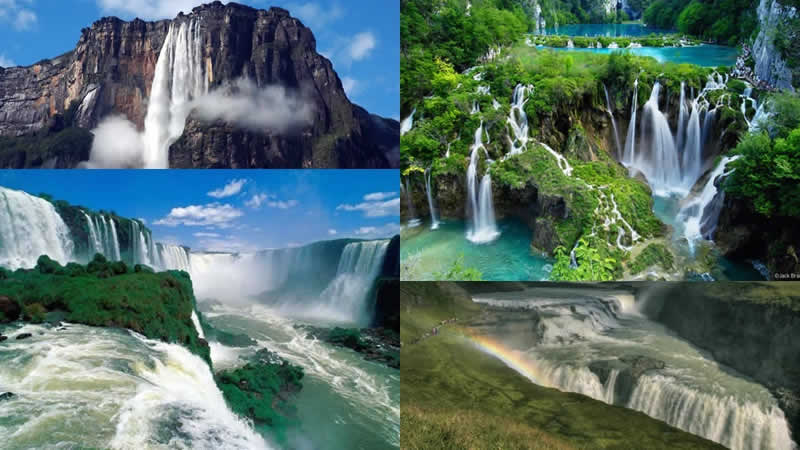 Nature has gifted us so many things to get amazed with. There are various beautiful nature-made and man-made creations spread all around. The gorgeous mountains, greenery, flowing rivers, and beautiful landscapes—all are a way to get freshness from. There are various wonderful waterfalls in the world that are known for their charm and beauty. The Plitvice Falls are found in Plitvice Lakes National Park, Croatia. It is one of the most amazing waterfalls in the world. It is known for its stunning cascades. The color of water varies from one cascade to another, adding great value to their beauty and attraction. The Gullfoss is a highly impressive tourist hub of Iceland. It is situated in the southeast part of the country. Its height is around 36 ft/11 m and 68 ft/21 m plunges. It is a beautiful and attractive place to see. The Niagara Falls is known to mark the border of USA and Canada. It is formed of two sections named the Horseshoe Falls on the Canadian side and the American Falls on the American side. The water can fall from the height of 173 ft. The Kaieteur Falls is a major attraction of Guyana. Its approximate height is 226 m, followed by the multiple steep cascades. This is known for its beauty, charm and great atmosphere. The Monge Waterfalls is another nice tourist point. This is located in Rauma Municipality of Norway, close to the Rauma River and the European route E136 highway. It is also known as Mongefossen. The approximate height of this waterfall is 773 meters. It is known as one of the most captivating tourist attraction. It can be seen from the nearby railway station.

Read More: 10 Amazing Travel Photos That Will Infect You With The Travel Bug The Iguazu Falls is one of the most amazing waterfalls in the world. It is present on the border of Brazil and Argentina. It is not too high, but of only 285 ft. It is a marvelous and very beautiful tourist point that forms a horseshoe and stretches for 8858ft. The Victoria Falls is also known as Mosi-oa-Tunya. It is an exceptional and beautiful tourist point. It is situated on the Zambia and Zimbabwe border. The water of Zambezi River falls down in a straight line for 354 ft. The width of this waterfall is around 5,604 ft/1,708 m. The Angel Falls is known to be the highest waterfall in the world. Its approximate height is 3,212 feet. It is also known as Salto Angel and this name is given to it in Spanish language. This is situated in the Canaima National Park, and is a UNESCO World Heritage site. This was first found in 19th century by Ernesto de Santa Cruz and was named after an American pilot, Jimmie Angel.

Tugela Falls is one of the most amazing waterfalls in the world. It is considered to be a large naturally-made waterfall. Its approximate height is 948 meters. It is situated in the Dragon’s Mountains, Royal Natal National Park of South Africa. It is known to shimmer due to the reflection of sun-light. The water is supplied by the Tugela River of the Mount-Aux-Sources. Utigord Falls is also known as Remnefjellsfossen because of the nearby mountain named Ramnefjellet. It is one of the beautiful waterfalls. It is known to have killed over 200 people as a consequence of landslides in 1905 and 1936. These falls are fed by the Ramnefjellbreen glacier that is one of the parts of the great Jostedal glacier. Its approximate height is 2,685 feet. You can approach the fall by sea plane, boat, or the road ride—whatever you like. It has an encampment that is present within the hiking distance at the base of the falls.