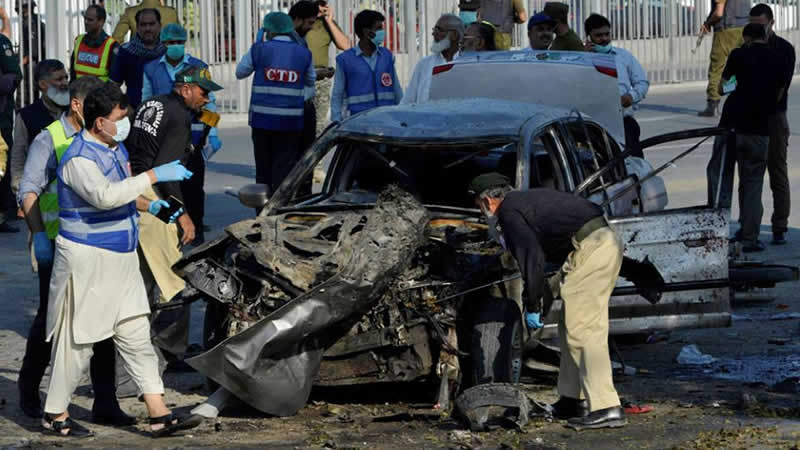 A suicide blast in Sabzi Mandi near Arfa Software Technology Park on Monday claimed lives of nine police among 26 persons and left over 56 wounded.

Deputy Inspector General (DIG) of Operations Wing of Punjab Police Dr Haider Ashraf confirmed in a media talk that it was a suicide blast. Preliminary probe suggested that at least nine to 11 kilograms of explosives were used in the attack. Banned Tehrik-i-Taliban Pakistan (TTP) has claimed responsibility of the attack.

However, earlier reports suggested that a vehicle bearing registration number LRB 9308, that was being driven in violation of traffic rules at the site, exploded. An anti-encroachment drive was underway in the area, Punjab law minister Rana Sanaullah said, not ruling out that police were the target. State of emergency was imposed in nearby hospitals and 56 injured were shifted to General Hospital.

Malik Muhammad Ahmed Khan, spokesperson for the Government of Punjab reported in an exclusive talk with Dunya News that at least four to five persons were critical but all resources were being utilised at General Hospital for their medical treatment. The government authorities held confirming the nature of the blast for over 2 hours. Both the spokesperson for the government and the law minister said that it was too soon to narrow the possibilities. According to the reporters on ground, security arrangements in the vicinity were weak, given that Chief Minister (CM) Secretariat is nearby. Though personnel belonging to security agencies and rescue department reached the site without objectionable delay. Three motorcylces and a car were destroyed in the blast.

Prime Minister (PM) Nawaz Sharif has strongly condemned the attack in the metropolis. He has offered condolences to the grieving families of the killed. According to the Prime Minister House, the premier has directed authorities in Lahore to ensure the best treatment of the wounded in hospitals. Army chief directed authorities for immediate rescue and relief efforts. CM Shehbaz, whose secretariat is near to the blast site condemned the attack and vowed to provide the best medical treatment to the injured. As scheduled, interior minister Chaudhry Nisar conducted his much-speculated-about press conference but refrained from talking about the political situation. He said that he would not be commenting on Panama Papers case today in wake of the blast in Lahore. He said that he has not cancelled the press briefing but has postponed it.