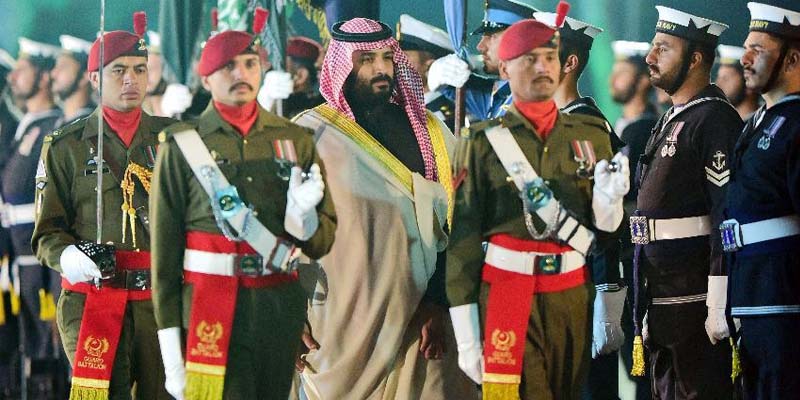 The crown prince, commonly known as MBS, is scheduled to have breakfast with Prime Minister Imran Khan in the PM House during which Memorandums of Understanding (MoUs) are expected to be discussed and talk progress on the agreements to be signed. Following this, a Saudi delegation led by MBS will meet National Assembly Speaker Asad Qaiser and the MNAs. Subsequently, Senate Chairman Sadiq Sanjrani will lead a meeting with the members of the Senate. The Senate chairman will gift Mohammad bin Salman a portrait and a gold-plated gun.

The Saudi leader will also be participating at an event slated to take place at the President House, where he will be honoured with the Nishan-e-Pakistan, the highest civilian award. Moreover, MBS is also expected to meet COAS Gen Bajwa. A luncheon has been scheduled at the President House in honour of the crown prince. At the end of the two-day visit, PM Imran along with members of his cabinet will see of the crown prince and the royal entourage at the Nur Khan airbase. Earlier, the Saudi crown prince landed on the red carpet in Pakistan on Sunday amid much fanfare and strict security for his two-day visit to the country.

Prime Imran Khan, Chief of Army Staff General Qamar Javed Bajwa and cabinet member welcomed the prince and his delegation as the Saudi plane touched down at Nur Khan Airbase, Rawalpindi. A formation of JF-17 Thunder and F-16 fighter jets escorted the plane of the 33-year-old prince after its entry into the Pakistani airspace. Besides, the prince was also given a 21-gun salute and a Guard of Honour upon arrival. The prime minister drove MBS to the PM House in Islamabad, putting diplomatic protocol aside. Big portraits of the Prime Minister Imran Khan, President Arif Alvi, King Salman bin Abdul Aziz and Crown Prince MBS along with banners celebrating Pak-Saudi friendship have been put on display on the Constitution Avenue