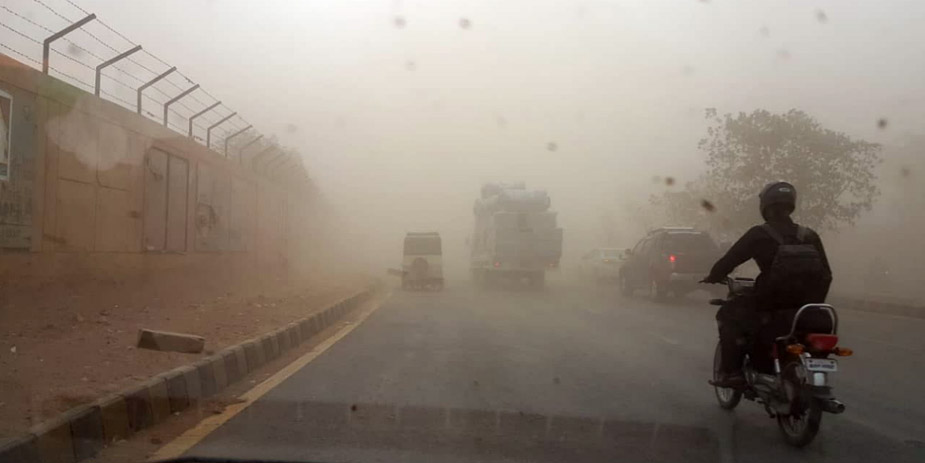 At least three people were killed and 86 others injured as an intense dust storm hit the metropolis Sunday night and continued Monday morning, dispersing sand around the city, downing trees and blowing away roofs in some areas. Incidents of wall and roof collapses were reported in Korangi, Landhi, Malir, Lyari, PECHS, Peoples Chowrangi and Surjani Town.

The sudden dust storm came with howling gales and hampered visibility on numerous major roads. The wind was so strong that it ripped off tin walls and knocked out power cables in some localities, cutting off electricity. Strong winds with dust continued to gush on Monday morning with light rain in some areas, including Orangi Town and II Chundrigar Road. Pakistan Meteorological Department (PMD) Director Sardar Sarfaraz said, “Last night’s dust storm was stronger than expected. Winds blew at a speed of 65km/h and reduced the visibility to 500 metres.” “A western wind system is present is the city and winds are expected to blow at high speeds today as well,” he added. “The western wind system will leave from the city by tomorrow evening.”

On the other hand, singer Fakhr-e-Alam warned against the winds throwing off garden furniture. He said: “Garden furniture in one of my neighbours’ house flew like a projectile and crashed into his vehicles windscreen breaking it.

“Please ensure there are NO free moving objects around you,” he added. Shehzad Roy tweeted a picture of his car that was parked in his garage yet covered in a lot of sand.

“My car is in a garage … you can imagine what’s going on outside.” Artist Nadia Jamil, however, was shooting for some project in Karachi and talked of how she had to protect herself from the dust in the air affecting her nose.

“Gotta keep that nosey clean in between shots,” she wrote, with a laughing emoji.