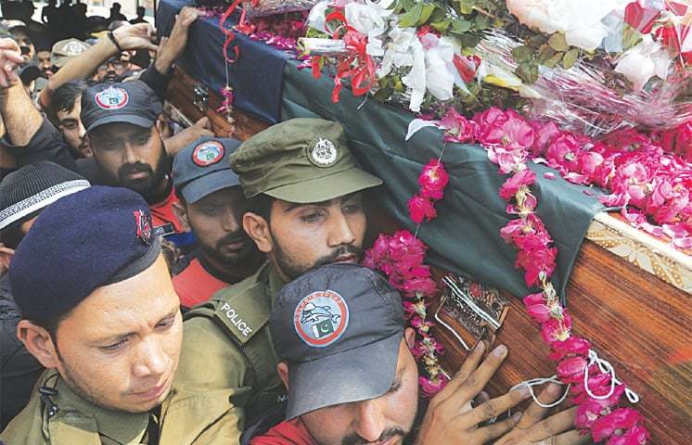 With the death toll in Wednesday’s Data Darbar shrine blast rising to 11 on Thursday, law enforcement agencies shifted focus to three major terrorist networks of the outlawed Tehreek-i-Taliban Pakistan (TTP) in Punjab to lay their hands on handlers/facilitators.

Among the four critically wounded, Elite Force man Saddam Hussain succumbed to his injuries at the Mayo Hospital, though he underwent complicated surgeries. Saddam, a resident of Kasur, had sustained multiple head and chest injuries in the suicide blast carried out on Wednesday morning at the gate of Hazrat Ali Hajveri shrine. Other three critically injured at the Intensive Care Unit of the teaching hospital were not yet out of danger.

Talking about investigation into the suicide blast, a senior police officer told Dawn that two high-profile teams of the law enforcement agencies had been assigned the task to go after three offshoots of the TTP and their facilitators.

Particularly, he said, the major focus was on Hizbul Ahrar which claimed responsibility of sending the teenage suicide bomber to hit the target at Data Darbar on Wednesday.

He said the law enforcement agencies were using available resources to track down handlers who dropped the boy (suicide bomber) at the shrine.

The official said the Counter Terrorism Department (CTD), Punjab, had examined the record of the three terror groups, including the Ghaiz Force and Jamatul Ahrar.

He said the Hizbul Ahrar, which claimed responsibility for the attack, was the splinter group of Jamaatul Ahrar headed by militant Muqarram Shah from Afghanistan.

Hizbul Ahrar had separated from Jamaatul Ahrar due to some internal rifts. It started operating separately to target primarily the law enforcement agencies in various parts of Pakistan.

In addition to that, the CTD, which was leading the entire investigation process, was also following other leads like the possibility of involvement of Daesh as well, he said.

The official further said the probe was being conducted on the pattern of the 2017 Mall Road blast investigation in which the LEAs had arrested the facilitator who had dropped the suicide bomber near the target site a few minutes before the blast.

As many as 14 people, including two DIGs and other personnel of the police, had embraced martyrdom when the suicide bomber blew himself up on The Mall in February 2017 when the officials were holding a dialogue with protesting traders.

The official said some 93 privately installed CCTV cameras in addition to those of the Safe City Authority had led the investigators to the handler, Anwarul Haq, who had dropped the suicide bomber on The Mall. He was arrested from a rented house in R.A. Bazaar of Lahore within 72 hours of the Mall Road blast.

The LEAs later arrested 13 more facilitators of Jamatul Ahrar and dismantled the group’s network after it claimed responsibility for The Mall attack. He further said the notorious group Hizbul Ahrar, which claimed responsibility for the Data Darbar blast, had last carried out a gun-and- bomb attack on a bus carrying personnel of a security agency in Attock in May 2018.

As many as six of them, including the facilitators, were arrested later in a marathon intelligence-based operation by the LEAs, he said.

The CTD officials would also grill the militants of Hizbul Ahrar arrested in the Attock case in connection with the Data Darbar blast.

Sources said the Punjab government was also discussing a proposal to form a joint investigation team.