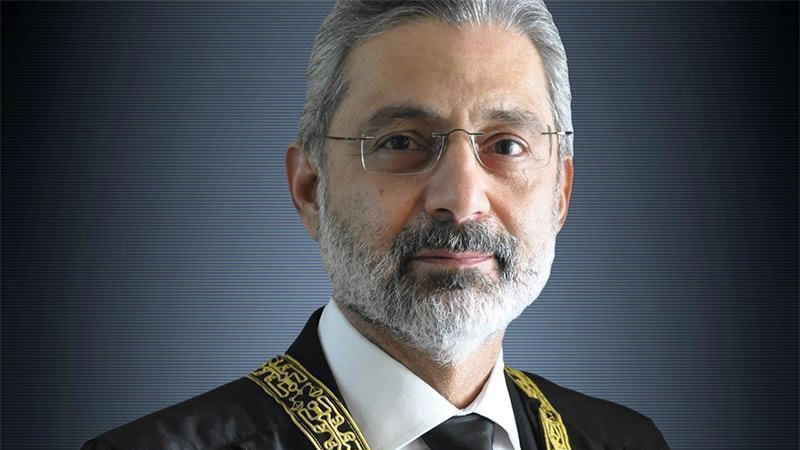 Federal government’s counsel Dr Farogh Nasim on Monday informed the Supreme Court hearing challenges to the presidential reference against Justice Qazi Faez Isa that the government was ready to face the consequences of failure to prove misconduct but the fallout would be across the board.

“It seems as if the president, the prime minister and the former law minister are on trial when the judge should have been on trial,” Dr Nasim said, emphasising that the government was ready to face the consequences but it would be on both sides.

The assertion came when Justice Syed Mansoor Ali Shah at the fag end of the hearing observed that there was no denying the fact that judges were accountable but so was the federal government and if the latter could not qualify the reference then the accountability would extend even further.

Justice Maqbool Baqar reiterated that this was a very serious matter as it would have serious consequences if the reference was quashed being based on malice. Referring to the government’s insistence on the show-cause notice issued by the Supreme Judicial Council (SJC) to Justice Isa instead of Section 116 of the Income Tax Ordinance (ITO), Justice Baqar observed that if the very foundation of the reference was shaken, the entire structure would crumble.

Justice Umar Ata Bandial, who is heading a 10-judge SC bench hearing a set of petitions challenging the filing of the presidential reference, said the counsel was moving away from the reference, which was very specific and revolved around violation of the ITO, by going into deeper points regarding responsibilities of the office of the judge.

“We cannot allow any challenge to a judge on generality on the basis of surmises,” Justice Bandial observed. He highlighted that no allegation of dishonesty or corruption had been attributed to the judge in the reference and no bar council or association had ever brought a complaint about corruption against Justice Isa.

Justice Bandial agreed that the judges were more accountable than others since they lived in the glasshouse, but asked the counsel to find out a solution since he was dissociating himself from Section 116 of the ITO which was the main allegation in the reference rather than dwelling at length to establish that the judges were the paragon of virtues.

Justice Bandial also reminded the counsel that he was yet to address the issue of malice which was of a different type in the 2010 Iftikhar Mohammad Chaudhry case than the present case, adding that Section 116 of the ITO, which the counsel was abandoning, did not impose obligation on the judge to disclose his wife’s assets. “You are expecting a full court of 10 judges to give a judgement out of blue on this, which will be very unfair,” he observed.

Dr Nasim cited the 2013 Asghar Khan case in which it was held that the judges were also holders of the public office and then referred to the Living Beyond Ostensible Means (Punishment) Regulation 1969 which stated that a person will deem to have assumed a style of living beyond his ostensible means if his wife or any of his children or dependent assumes a style of living beyond the ostensible means of the wife or children and suggests rigorous imprisonment of three years.

What is expected of the judge is to declare the expensive properties in the name of his wife since non-disclosure of the same will create a perception among the public about the undisclosed public assets.

A member of parliament disqualified to be the member under Article 63 of the Constitution for not declaring properties, the counsel argued, adding that the misconduct on the part of the judge could not be limited to the violation of any law.

Justice Bandial, however, said he was not impressed with the 1965 regulation since it was a draconian law.

The counsel explained that the martial law regulation was not the draconian law and referred to the 1993 Fauji Foundation case where it was recognised as a law. Besides, while pointing to Senator Raza Rabbani who was present in the courtroom, he contended that a democratically elected government had adopted this law by not deleting rather than keeping it under the 18th Constitution Amendment. Therefore, he argued, this was not the draconian law.

The counsel cited a number of judgements from India, Canada and other countries to establish that the judicial office was the office of public trust demanding that the slightest hint of impropriety should be avoided. “Caesar’s wife must be above suspicion,” the counsel contended, adding that the judiciary survived through public confidence and that the judge should withdraw himself from the office in case his credibility was clouded since he lost the command and respect among the public.

“A judicial scandal is more reprehensible than the scandal on the part of the legislators,” the counsel argued and, while citing the judgements, contended that the criminal offence by the judge was enough to initiate disciplinary proceedings.

Justice Mansoor Shah asked if the Federal Board of Revenue (FBR) was obliged to provide tax record of a wife if the husband judge requested the revenue department to provide the same for some disciplinary case the judge was facing. In case the FBR refused to provide the tax record, the entire rule of proximity, which the counsel was propagating, would go, he observed.

The counsel argued that in order to keep the stream of justice pure and clean, it was necessary that the judge should be of a sterling character and should not be the man of kiln rather had a fighting faith, adding that the office of the judge should be an impregnable fortress from all surreptitious attempts be it economic, political, etc.

After the 1996 Al-Jihad Trust case, the superior court judge had singularly become the most powerful and respected office enjoying blind faith of the people since he was expected of enjoying unblemished integrity, the counsel said, adding that this respect in society had to be maintained at all cost since the entire society would crumble if the judiciary had no integrity left.

“It means you also recognise that the instant case is the case of independence of judiciary and how it is necessary that the judge should be fiercely independent,” Justice Shah observed.

At this, the counsel recalled how Justice Shah made “us all proud” when being a judge of the Lahore High Court, he wrote a letter to the then registrar of the high court and set out golden principles.