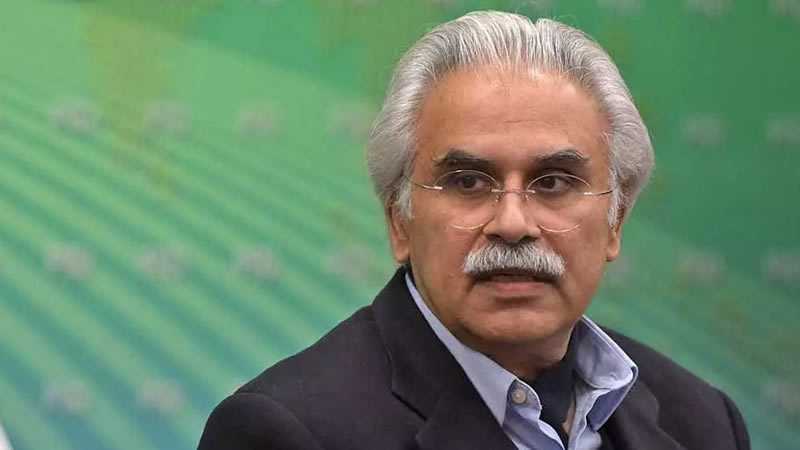 Special Assistant to the Prime Minister on Health Dr Zafar Mirza on Sunday warned that coronavirus cases in the country could spike again.

Addressing a press conference in Islamabad, he said that the virus had peaked in the country in mid-June and cases had been declining since then. He added that the country would face two big challenges in the coming weeks — Eidul Azha and Muharram.

Mirza said that the experience of other countries had shown that there could be a spike in cases again. “We saw this in Spain, Iran, United States and other European countries that there can be a resurgence in cases.”

Talking about the danger of the virus spreading during Eid celebrations, Mirza said that the government had “learned from last Eid’s experience” and had started preparations earlier. “During the last few weeks, we discussed standard operating procedures (SOPs) with provinces and adopted a strategy at the national level.”

He urged people to follow SOPs while visiting cattle markets. “Wear a mask, maintain social distancing and wash your hands frequently,” he instructed, adding that elderly or sick people should not visit the markets.

The SAPM further said that the government had disallowed cattle markets being set up inside the cities. “You will have seen that small cattle markets start popping up in cities around Eid. That will not be allowed this time but cattle markets are allowed to be set up as far outside cities as possible.”

Mirza also urged people to opt for booking sacrificial animals online or for ‘ijtimai qurbani’ (collective sacrifice). He said that the SOPs based on a 20-point agenda agreed between the government and ulema for Eidul Fitr would be implemented for prayers on this Eid as well.

“Please follow all SOPs. I appeal to you, for God’s sake, take responsibility and celebrate [Eid] in a good way. If we [follow SOPs], not only will be able to maintain the trend of lesser infections but will also be able to get rid of this pandemic,” Mirza said.

‘Lockdown not a sustainable solution’

Meanwhile, Information Minister Shibli Faraz, at a separate press conference later in the day, stated that the country’s leadership had decided early on that imposing a lockdown was not a sustainable option.

He said that there was a lot of opposition to the decision taken by the premier, who only wanted to strike a balance between protecting the people’s lives and ensuring their livelihood.

However, the way Pakistan has handled the coronavirus pandemic is being lauded internationally, he said. “There are several countries that have modeled [their response] after us,” he said.

The information minister also lauded the efforts of healthcare workers, paramedics, nurses, law enforcement officials and media personnel, who have played an active role during the coronavirus outbreak.

PM’s aide Tania Aidrus added that when the government started working on tackling the Covid-19 outbreak, it was decided to take steps that would benefit Pakistan in the long run.

“You can see that our daily number of cases is falling, the positivity ratio is in single digits […]. The ultimate goal behind taking these steps was to give us long-term benefits, so that we are better prepared for such a situation in the future.”

She maintained that all the steps taken by the National Command and Operation Centre (NCOC) were taken in light of real-time data which played a “critical role” in decision-making.