Novak Djokovic Disqualified from US Open after Hitting official with Ball 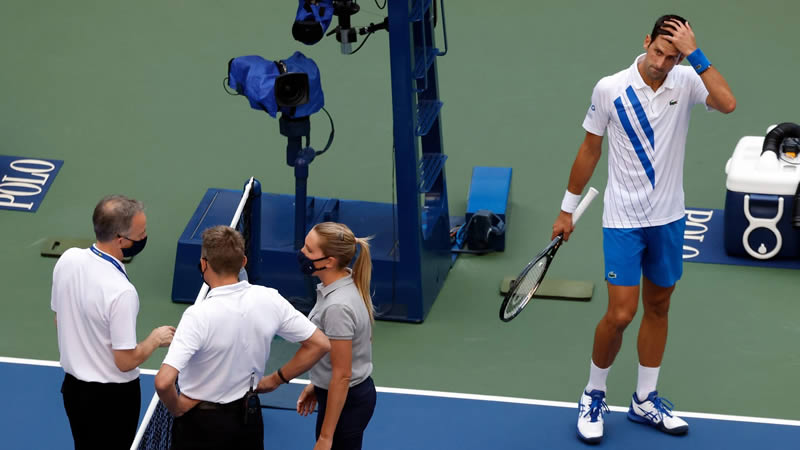 The rule on the books is not well-known to some tennis fans, but it is clear.

Novak Djokovic’s default from the United States Open after hitting a line judge in the neck with a ball that he struck toward the back of the court in frustration is perhaps the most costly one in tennis history.

It fell under the Grand Slam rule book’s definition of “physical abuse,” which states that players “shall not at any time physically abuse any official, opponent, spectator or other person within the precincts of the tournament site.”

The rules subject a player to a fine of up to $20,000 for each violation of this rule, with the possibility of escalation if it is deemed a “major offense.”

“In circumstances that are flagrant and particularly injurious to the success of a tournament, or are singularly egregious, a single violation of this section shall also constitute the major offense of ‘Aggravated Behavior’ and shall be subject to the additional penalties hereinafter set forth,” the rule book says.

At its harshest, “aggravated behavior” can trigger “a fine of up to $250,000 or the amount of prize money won at the tournament, whichever is greater, and a maximum penalty of permanent suspension from play in all Grand Slam tournaments.”

Djokovic had earned exactly $250,000 for reaching the fourth round of the U.S. Open.

In a statement, the United States Tennis Association said: “In accordance with the Grand Slam rule book, following his actions of intentionally hitting a ball dangerously or recklessly within the court or hitting a ball with negligent disregard of the consequences, the U.S. Open tournament referee defaulted Novak Djokovic from the 2020 U.S. Open. Because he was defaulted, Djokovic will lose all ranking points earned at the U.S. Open and will be fined the prize money won at the tournament in addition to any or all fines levied with respect to the offending incident.”

Despite the clarity of the rules, Djokovic pleaded his case for several minutes, saying that the line judge would not need to go to a hospital. A tournament official on court responded to him that the consequences might have been different had the line judge not collapsed to the ground and stayed there for a prolonged time in clear distress.

Incidents of tennis players striking officials are rare, but not unprecedented. There were two high-profile incidents of similar defaults in men’s tennis, though none as significant as the disqualification of a top-seeded player at a Grand Slam.