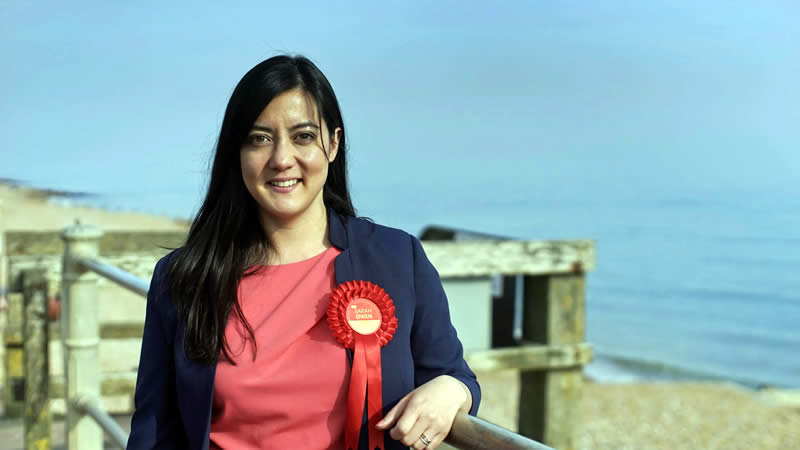 A member of parliament from the Labour party this week made a moving speech in Westminster Hall, where parliament witnessed a discussion on the situation in occupied Kashmir.

“I’m sure that at some stage we have caught ourselves moaning about lockdown, but for the people of Kashmir, it’s not something new. And unlike Kashmir, lockdown is not about safety, it is about control,” MP Sarah Owens said to fellow parliamentarians in a debate that was live-streamed on Wednesday.

“The lockdown of 2019 shut off entire communities and also their communication to the outside world. Families worried about loved ones. Students studying in Luton, unable to get their fees paid from [occupied] Kashmir, because banking ceased. Curfews [imposed] to control people’s lives, not a virus. A lockdown enforced by half a million soldiers.”

MP Sarah Owens is from Luton North, a constituency which has a significant number of British Pakistanis. The Pakistan diaspora across the United Kingdom has played a significant role in highlighting the plight of people living under Indian occupation in Kashmir, especially since August 2019 when the Narendra Modi-led government illegally stripped the valley of its special status.

British Pakistanis, many of whom have family in both Azad Jammu and Kashmir and in the disputed territory, have protested the Indian government’s move by writing letters to MPs, staging demonstrations and posting on social media.

Ms Owens has been a vocal supporter of the Kashmiri people and has in the past expressed solidarity with those living under occupation. This week she highlighted how the pandemic has affected the everyday realities of Kashmiris.

“Muslims have reported being turned away from hospitals. This is shocking at the best of times, but especially so during a pandemic,” she said, adding: “There are numerous reports of Kashmiri women and girls being raped. Senior officials in the BJP put on record their intentions to make Kashmiri women a part of this conflict. And I have heard [that there are] women in Kashmir that are terrified of being assaulted by the thousands of soldiers on their doorstep. Women fear for their lives and do not feel safe.”

She called on the British government to do more to condemn the situation in Kashmir.

“We often hear from the Minister that the UK cares about women’s rights. But will the actions match the rhetoric? What guarantees can he give that rape cases and asylum cases will be taken seriously by colleagues at the Home Office?”

She also asked: “What is this government doing to tackle the use of social media sites, in particular WhatsApp, which is used to stoke the flames and division in the messages we see to further weaponise Islamophobia in the region?”

Mr Raab spoke in the House of Commons and said the government would review export controls that apply to Xinjiang province to prevent the sale of goods which might contribute to human rights abuses.

Ms Owens, who is also the chair of the group ‘Chinese for Labour’, noted the government’s response to the ongoing persecution of Uighurs, and called on the government to take a similar stance on Kashmir.

“The government has quite rightly shared their views on China’s treatment of the Muslim population in that country. What we must do is take a similar stance to the issue of Kashmir,” she said.

WHO Team Probing Origin of Virus Arrives in Wuhan