Investigator removed ahead of pro-Tareen MPs’ meeting with Imran

by Top
in Pakistan, Political Parties
0 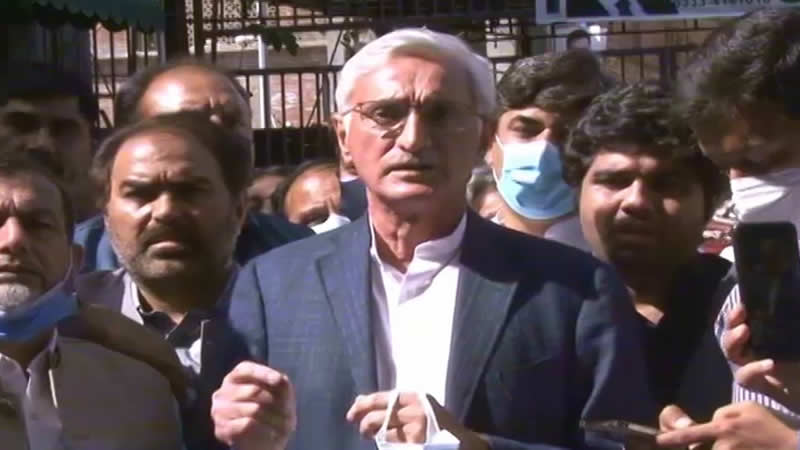 Apparently giving in to the demand of over 30 lawmakers backing the estranged leader of the ruling Pakistan Tehreek-i-Insaf (PTI) Jahangir Khan Tareen group, the government on Monday removed the Federal Investigation Agency (FIA) officer heading investigation against Mr Tareen and his son in the sugar scam.

The significant development took place in the backdrop of a likely meeting of the ‘rebel’ PTI lawmakers with Prime Minister Imran Khan in Islamabad on Tuesday (today).

“The sugar scam inquiry team head FIA Director Lahore Mohammad Rizwan has been removed from the investigation with immediate effect,” a source in the information ministry told Dawn on Monday. He said Mr Rizwan got the marching order, adding that it was the main demand of former PTI secretary general Jahan­gir Tareen and the lawmakers who are with him.

It is yet to be confirmed whether Mr Rizwan has also been transferred from FIA. Interestingly, Mr Rizwan not only booked Tareen and his son Ali but also registered FIR against PML-N president Shehbaz Sharif and his son Hamza Shehbaz in Rs5 billion money laundering and fraud charges in the sugar scam.

Mr Rizwan had also laid hand on the sugar mills of power federal minister from South Punjab Khusro Bakhtiar and his family members and two sugar mills of two media houses. The FIA investigators under Mr Rizwan had detected Rs110 billion earning by the sugar mafia during the last one year through ‘speculative pricing’. The FIA during the course of inquiry against the sugar mafia said: “It has transpired that sugar industry barons, sugar-brokers & their satta-agents (speculative pricing players), in active connivance with sugar-mills, have transformed into a clandestine sugar satta-mafia and are operating in a collusive but secret-mode, especially through electronic means/ WhatsApp groups to dishonestly and fraudulently maneuver, manipulate and artificially hike sugar prices, amidst hoax of impending sugar-stocks shortages (while sugar-stocks are lying ‘unsold’ or ‘sold/un-lifted’ in mills & godowns and demand-supply gap is artificial)”.

Mr Tareen and his son have been on bail till May 3 in the FIA cases.

Meanwhile the Tareen camp’s active leader Malik Nauman Ahmad Langrial said the prime minister had finally accepted the request of the parliamentarians and called all those 31 who had signed the (request) letter.

“We see this meeting as an ice-melting event and do hope that all of their concerns that Mr Tareen should not be victimised through the state institutions is given serious consideration,” he said.

Mr Tareen’s sympathisers in the Punjab and National Assembly had emerged after he was booked in different cases and summoned to appear before the banking and sessions courts. Tareen camp’s outspoken MNA Raja Riaz had demanded that the prime minister should give them time so that they could explain him their concerns as they believed that Mr Tareen was being victimised.

Mr Riaz had threatened the prime minister to change his approach or they would be forced to take a step on their own. “We are making last humble request in the ‘Riasat-i-Madina’ that we want nothing but justice,” he had said.

Mr Tareen, the sugar mogul, claimed that allegations in the FIRs lodged against him were not criminal in nature and fell within the jurisdiction of Securities and Exchange Commission of Pakistan. He said all of his businesses had been inspected during the previous PML-N government and nothing wrong had been detected by investigators.

Pakistan has only three weeks of wheat stocks left

Pakistan has only three weeks of wheat stocks left