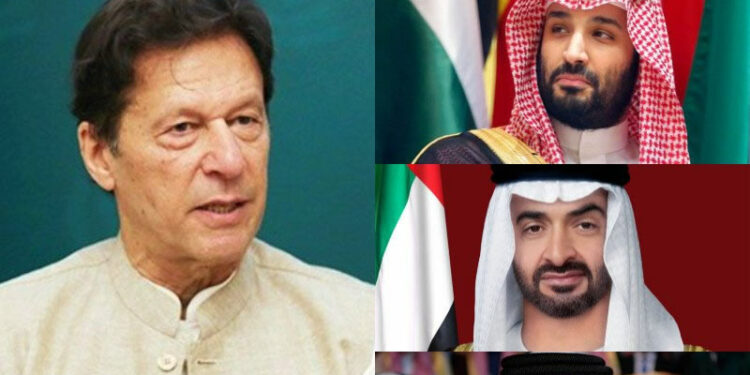 Prime Minister Imran Khan on Sunday had a detailed discussion on the latest development in Afghanistan with leaders of key Gulf countries comprising crown princes of Saudi Arabia and the United Arab Emirates (UAE) as well as the Amir of Qatar.

According to the Prime Minister’s Office (PMO), during a telephonic conversation with Saudi Crown Prince Mohammad bin Salman, the two leaders discussed bilateral relations and exchanged views on the current situation in Afghanistan.

The official statement said that the prime minister conveyed warm wishes for Saudi King Salman bin Abdulaziz. He reaffirmed Pakistan’s desire to further fortify the historic fraternal ties with Saudi Arabia and the country’s support for the kingdom’s sovereignty and territorial integrity.

Recalling the two historic initiatives recently announced by the crown prince to tackle the adverse impacts of climate change and environmental degradation, PM Imran thanked the prince for inviting him to participate in the launch ceremony of the Middle East Green Initiative (MGI), scheduled in Riyadh in October.

The statement added that the two leaders had a detailed discussion on the latest situation in Afghanistan. “The prime minister underscored that a peaceful and stable Afghanistan is vital for Pakistan and regional stability.”

The prime minister stressed that the international community had the responsibility to stand by the Afghan people and support them economically as well as to help rebuild the country.

He emphasized the need to address the urgent humanitarian needs and take steps to ensure the economic stability of Afghanistan, the statement added.

Both the leaders agreed on the importance of an inclusive political settlement in the war-torn country. It was further agreed that the international community must step up its engagement in order to avert any humanitarian and refugee crises.

PM Imran and the crown prince agreed to work together to further augment and diversify bilateral ties in all spheres.

In a similar engagement with Abu Dhabi Crown Prince Mohamed bin Zayed earlier today, both leaders exchanged views on the issues of bilateral interest as well as regional developments particularly the latest situation in Afghanistan.

“The prime minister reaffirmed the importance Pakistan attaches to its strong fraternal ties with the UAE and close cooperation between the two countries,” the PM Office said in a statement.

On the latest situation in Afghanistan, Premier Imran underscored that a peaceful and stable Afghanistan is in the vital interest of Pakistan and the region.

He said that an inclusive political settlement is the best way forward to ensure safety and security as well as protection of the rights of the people of Afghanistan.

PM Imran stressed that the world community must remain engaged, in order to support the Afghan people, economically and to help rebuild the country.

He emphasised the need to address the dire humanitarian needs and to ensure the economic stability of Afghanistan.

The prime minister congratulated the Abu Dhabi crown prince for making excellent arrangements for the upcoming ‘Expo 2020’. He conveyed his best wishes for the resounding success of the mega event.

PM Imran and the crown prince agreed to work together to enhance collaboration in all areas of common interest, the communiqué read.

“The two leaders discussed bilateral relations and exchanged views on the evolving situation in Afghanistan,” a statement issued after the conversation by the PM Office stated.

The prime minister reaffirmed Pakistan’s desire to further strengthen its political and economic partnership with Qatar. He appreciated Qatar’s assistance to Pakistan during the pandemic, in particular the care afforded to more than 200,000 Pakistani expatriates working for the progress and development of both countries.

The premier underscored that a peaceful and stable Afghanistan is in the vital interest of Pakistan and the region. He underlined that after 40 years of conflict and instability, there is an opportunity to establish lasting peace in Afghanistan.

PM Imran, according to PMO, emphasized that the world community must remain positively engaged and support the Afghan people at this crucial juncture – both economically and to help rebuild the country. This, he stressed, was crucial to averting humanitarian and refugee crises in the country.

The two leaders agreed to remain in close contact on bilateral matters as well as regional and international issues of mutual interest.