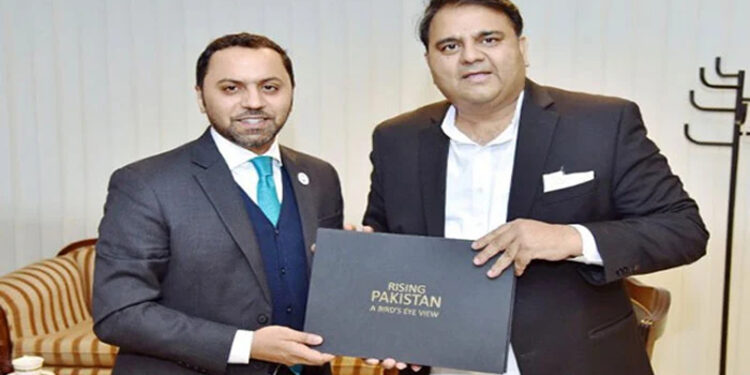 “1.6 million Pakistanis living in the UAE is the second largest population of Pakistanis overseas,” he said while talking to UAE Ambassador Hamad Obaid Ibrahim Al Zaabi who called on him here.

The minister congratulated the envoy for UAE’s plan to organize the mega-event ‘Expo 2020 Dubai’.

The expo would have a “unique” Pakistani pavilion, he said, adding that the ministries of commerce and information were making preparations to participate in the expo.

On the situation in the region, Fawad said that peace in Afghanistan was in the interest of the region.

“Pakistan has made sincere efforts for peace and stability in Afghanistan. Our role in the evacuation of foreign nationals from Kabul has been appreciated by the whole world,” he said.

The minister said the role of the Pakistani community in the UAE was of “utmost importance” in promoting people-to-people contacts between the two countries.

The UAE ambassador said that the UAE and Pakistan were committed to strengthening and diversifying relations in all fields. “Pakistan has played a valuable role in stabilizing the region, especially Afghanistan, which is commendable,” he added.

During the meeting, they discussed other issues of mutual interest, including bilateral relations, promotion of cooperation in various fields, and the situation in Afghanistan and the region.