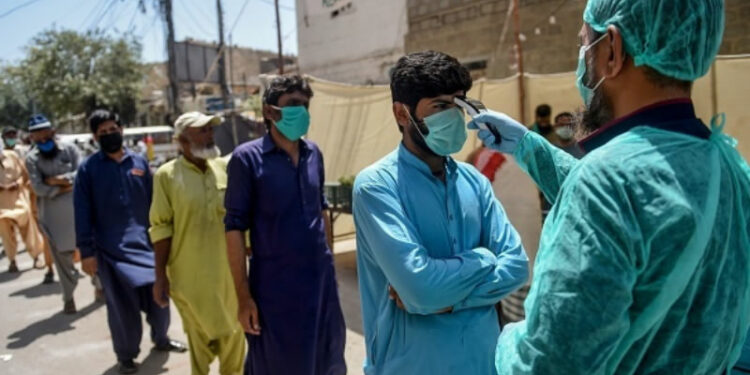 Islamabad records two casualties, over 200 cases. NCOC refutes news about extension in the closure of educational institutions till 30th

While the country reported less than 3,000 Covid-19 cases after a gap of 50 days, Special Assistant to the Prime Minister on Health Dr Faisal Sultan on Monday claimed that Pakistan was performing well in terms of vaccination.

However, he said the pandemic was very much there so the citizens should continue wearing masks as it was one of the best preventions against the virus.

According to the National Command and Operation Centre (NCOC) data, 2,988 cases were reported and 67 people lost their battle against the virus in a single day across the country.

Earlier, 2,819 cases had been reported on July 24 and since then the daily number of infections had remained over 3,000. The highest number of cases was reported on Aug 4 when 5,661 people were found infected.

Any decision regarding extension in the closure of the institutions will be communicated through official channels, it added.

An official of the Ministry of National Health Services said people should not give heed to such rumours.

“Situation of Covid-19 has been improving and most probably educational institutions will open from Sept 16. In case of rumours parents are advised to check through authentic sources and do not trust social media,” he added.

According to the NCOC data, over 50pc ventilators were occupied in the cities of Multan, Sargodha and Lahore and more than 60pc oxygenated beds were in use in Sargodha, Multan, Gujrat and Swabi. The number of active cases was 90,545 on Monday. The national positivity was 5.62pc and 5,066 patients were on critical care.

At the inaugural ceremony of a ‘Wear a Mask-Protect Pakistan’ drive at the World Health Organisation (WHO) office in Islamabad, Dr Sultan said people should maintain social distance to combat the fourth wave of the pandemic.

“I am hopeful that soon the time will come when we will say that you don’t need to wear masks. However, currently, you need to take all precautionary measures and wear masks. We also want our institutions to be strengthened so that people would benefit,” he said.

Dr Sultan said Pakistan had dealt with Covid-19 in a better way compared to other countries.

“Daily around one million people are being vaccinated and 50 million people have been partially or completely vaccinated till date. But along with vaccination, I would suggest that people should wear masks,” he said.

It may be mentioned that the virus was detected in China in Dec 2019 and then started spreading to other countries. Pakistan had closed its borders and took a number of steps to check the transmission of the virus.

The first case of Covid-19 was reported in the last week of February 2020. On March 13, the first meeting of the National Security Committee (NSC), composing top civil and military leadership, was held to discuss the crisis which was later declared a pandemic by WHO.

Prime Minister Imran Khan chaired the meeting of the NSC and directed the concerned authorities to devise a comprehensive strategy against it.

The first lockdown was announced on March 16, 2020, and a number of industries, including the construction industry, educational institutions, restaurants and marriage halls, were closed.

The National Disaster Management Authority (NDMA) was involved to ensure medical equipment and health-related supplies at the earliest due to which the coordination with the provinces improved.

To date, four waves of Covid-19 have been declared.

Meanwhile, in the federal capital, two deaths and 246 new cases of the virus were reported on Monday.