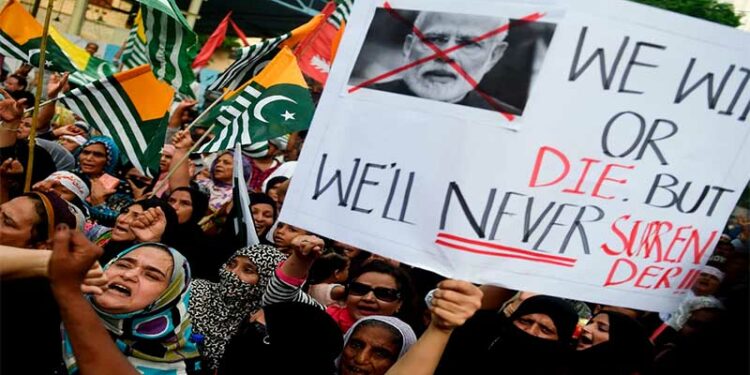 The government has planned a series of activities including seminars and conferences to mark the Youm-e-Istehsal and express solidarity with the oppressed Kashmiri people while rallies in their support would be staged across the country with vibrant participation of people from all walks of life.

The whole nation will give a message to their Kashmiri brethren that the people of Pakistan would always stand with them in their just struggle for right to independence and against the atrocities committed by the Indian forces.

Kashmiri people on both sides of the Line of Control and all over the world will also observe Youm-e-Istehsal to condemn unconstitutional step taken by India on August 5, 2019.

The activists of all the political parties of the country will record protest over Indian state terrorism meted out against innocent and unarmed people of IIoJK through rallies and other activities.

The civil society organizations will also arrange seminars and other programs to highlight gross human rights violations against the Kashmiri people.

Meanwhile, posters and billboards have been displayed at the main roads of Islamabad and other provincial capitals to highlight the plight of Kashmiri people and expose the atrocities being committed by the occupation forces in IIoJK.

Ministry of Foreign Affairs has released the teaser of song ‘Jalta Hai Kashmir’, which will be aired on August 5, to expose the atrocities of Indian army in Kashmir and show solidarity with Kashmiris against the Illegal occupation by India.

Lok Virsa in collaboration with Ministry of Kashmir and Gilgit-Baltistan has planned to arrange special programs to mark Youm-e-Istehsal including Kashmiri Artisans-at-Work, Photo Exhibition on Kashmir, Screening of Video Documentaries on Kashmir.

The vocals of the song are given by Zohaib Zaman and music by Salman Ali while the lyrics are penned by Mushtaq Shad and will be released by Ministry of Foreign Affairs Kashmir Cell.

On August 5, 2019, the Modi-led Bharatiya Janata Party government struck down Articles 370 and 35A of the Indian constitution, thereby scrapping the law that granted Kashmir its special status.