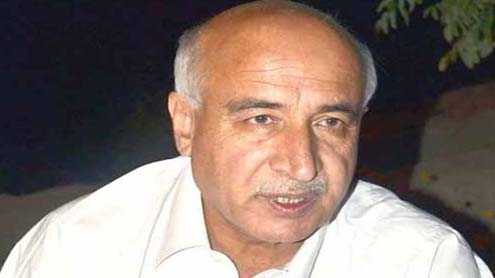 Balochistan Chief Minister Dr Abdul Malik Baloch said here on Sunday that a provincial all-party conference planned for December would focus on dialogue with Baloch militants, the issues of missing persons and the dumping of bullet-riddled bodies.

Speaking at the Karachi Press Club’s ‘Meet the Press’ programme, he said the issues plaguing Balochistan were political as well as economic. He said the political issues were a Baloch insurgency, religious and sectarian divide, tribal conflicts and “troops imposed on the province”. About insurgency, he said that it was going on for a long time and “we need to look back at the history, while keeping the constitution in mind, to come up with a solution. It is very difficult but something that we need to do.” Dr Baloch said the APC would be held in December to work out a strategy to deal with the insurgency. When a senior journalist asked him whether he had contacted the Baloch Republican Party’s Brahmdagh Bugti over the issue, he said he had not spoken to him yet, “but I wish to communicate with him”.

The chief minister said “incidents of bullet-riddled bodies being received have reduced” but it remained his “first priority” in the coming APC along with the missing persons’ issue. He added: “I have been unsuccessful so far. I need time and space to work on the missing persons’ case. Dialogue and institutional reforms are necessary at the moment.” Speaking about the posting of Frontier Constabulary (FC) personnel all over the province, which has been a sour issue for years, he said that until the Levies and police got “stable and on their foot, we’ll need the FC’s help”. He said the political quagmire that the province faced was closely linked to past corruption that had severely affected the economy. “Thirty districts are very poor, health indicators are low, police and Levies are not as brave as they used to be. Until we are politically stable, we’ll face these challenges.”

But even though he admitted that insurgency was one of the core issues, he repeatedly stated during his speech and while answering questions that “the situation is not as grim as portrayed in the media”. He said there were only a few districts where there had been “no writ of the government for over 10 years”, including Makran, Awaran and Jhalawan, and some sub-districts and tehsils. The recent earthquake in the province brought to light the conflict-ridden zones which were previously not visited or talked about much. Answering a question about recent reports of separatist groups attacking army personnel during distribution of relief goods in Mashky, he said: “We have delivered trucks carrying goods everywhere and none of them has been reported stolen.”

Also, it is an understood fact that the army goes to quake-affected areas, irrespective of where it is required to go. He said complete reconstruction and development of the affected areas would require a package of at least Rs40 billion which the provincial government could not afford. “We have a package of Rs35 billion for the entire province. We need the federal government to either support us or to give us the resources to help out people.” When asked how the Balochistan government was planning to protect journalists, the chief minister retorted: “How protected are the journalists working in Karachi?” He, however, agreed to consider constituting a commission that could independently investigate cases of murdered journalists belonging to Balochistan.

In an interview given in the past as a National Party leader, Dr Baloch had said that he would safeguard his land from any outside intervention, in terms of development projects, etc. When asked about it, he said he still believed so “We’ll safeguard our land in any way we can and demand equity.” Facing a barrage of questions, the chief minister remained non-committal on some issues and candid on others. He reminisced about the time he had worked for a magazine named, Rehbar, which was published from Karachi. “I spent many evenings in the corridors and veranda of the press club, discussing the magazine and the stories we wanted to carry,” he said as with a smile.-Dawn