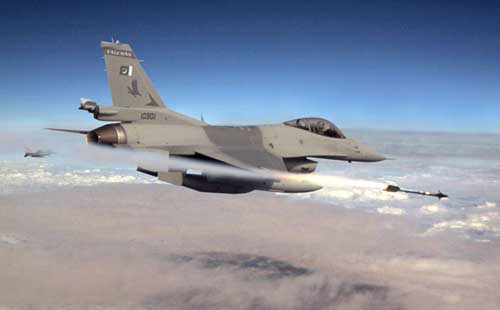 Jet planes bombed hideouts of militants in various areas of Khyber Agency early on Thursday. The operation was carried out on a tip-off that militants who were involved in the Sabzi Mandi blast in Islamabad and the attack on the police in Charsadda were present in the area, military sources said.

No loss of life was reported as of yet. The attacks An explosion on Nowshera Road in Charsadda early on April 22 left three people dead and 33 others injured including 12 policemen. On April 9, a high-intensity remote-controlled blast in Sabzi Mandi in Islamabad had left at least 22 people dead and dozens injured. Previous bombings On February 27, gunship helicopters had carried out shelling in tehsil Kulachi, FR Dera Ismail Khan in which three suspected militants were killed.

This was the first time that the Pakistan military had conducted shelling in the settled area of Khyber-Pakhtunkhwa. At least 30 militants perished as warplanes pound their hideouts on February 25 in the South and North Waziristan, according to military officials. The airstrikes mainly took place in Datta Khel and Shawal areas of North Waziristan where militant training facilities and compounds are said to be located. On February 23, airstrikes were carried out in the remote Tirah Valley of Khyber Agency in which security forces killing at least 38 militants, including key commanders.

Six hideouts were also destroyed, they had added. Just a day earlier, on February 22, security forces had carried out shelling on militant hideouts in Thall sub-district of Hangu, killing at least nine insurgents. On February 19, at least 30 suspected insurgents were killed and several others got injured as military jets and gunships had bombed their hideouts in the North Waziristan and Khyber agencies. -tribune