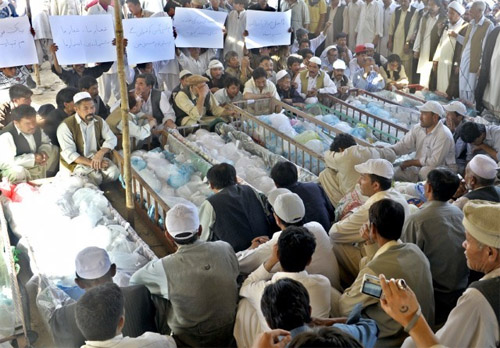 Unidentified armed men killed eight members of the ethnic Hazara community and injured six others in the Hazar Ganji area of Quetta, the capital of the volatile Balochistan province, on Thursday morning.

Imran Qureshi, a senior police officer told  that the armed men opened fire at a Mazda bus and killed eight members of the Hazara community.

“The assailants sprayed bullets over the bus and managed to escape unhurt from the spot,” Qureshi said. The bodies were brought to the Bolan Medical Complex hospital where a large number of people had gathered. [contentblock id=2 img=adsense.png]Qureshi said initially six people had been killed, however, two more succumbed to injuries on way to the hospital. “This is an act of targeted killing,” he said. Panic prevailed among locals after the killings.

The predominantly Shia community whose members stand out on account of their Central Asian features has come under increasing attacks by extremist groups such as the Lashkar-i-Jhangvi (LJ). Estimates provided by Tahir Hussain Khan, president of the Balochistan chapter of the Human Rights Commission of Pakistan(HRCP), earlier this month show that the violence has driven as many as 200,000 Hazaras to relocate to other major cities of Pakistan or move abroad. The Hazara Democratic Party (HDP) has announced shutter down in Quetta on Friday (tomorrow) to mourn the killings of the eight.

In a statement issued by the HDP, the party lashed out at the provincial government and law enforcement agencies over their failure to protect Hazaras Shias in the city.

“Under a pre-planned conspiracy, our people are being targeted,” the statement said. The Majlis-i-Wahdatul Muslimeen (MWM) has also announced three days of mourning over today’s killings. It has moreover criticised the government and law enforcement agencies for their failure to protect citizens.  -dawn

10 of World’s Most Beautiful Gardens

10 of World’s Most Beautiful Gardens