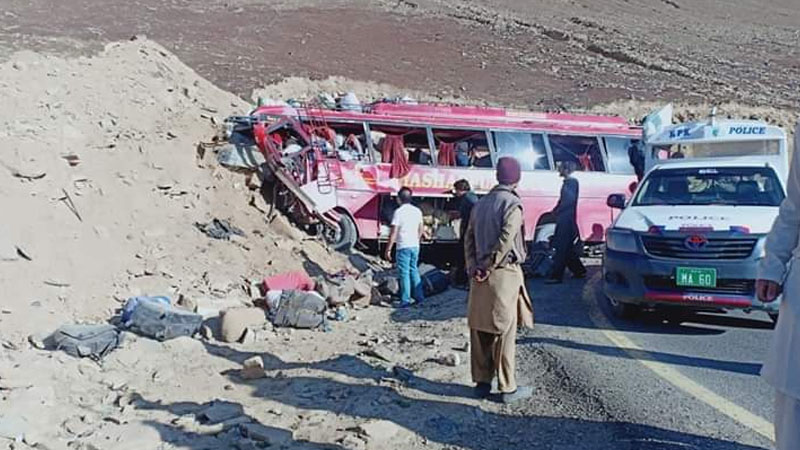 At least 26 individuals, including several Pakistan Army troops, were killed and over 19 injured in a passenger bus accident on Babusar Pass in the Diamer district of Gilgit-Baltistan (GB) early on Sunday.

According to Diamer Police Spokesperson Mohammad Wakeel, the passenger bus, belonging to a private company, had left from Skardu early on Saturday for Rawalpindi. However, the lost control of the bus and crashed into a mountain, resulting in a tragic accident.

Soon after the accident, other vehicles on the road stopped and the people started making efforts to shift the injured to District Headquarters Hospital (DHQ) in Chilas.

According to a passenger who helped in shifting the bodies, no ambulance and rescue team had arrived in the area even after one hour of the accident. Due to delayed rescue operation, the number of casualties had increased.

Talking to Pakistan Today, GB government Spokesperson Faizullah Faraq said that the deceased and the injured were shifted to DHQ Chilas after almost three hours of the incident and emergency was declared at the hospital.

According to APP, the bodies of 26 passengers including 10 Army soldiers who lost lives in the mishap have been shifted to CMH Gilgit. However, an official army statement has yet to be issued.

According to locals those who lost lives in the incident included five members of a family from Skardu. Three children of Shaikh Muhammad Ali namely Raza, Masooma and Aimen, his sister Ume Kosar and her son Mustafa were among the deceased.

Shaikha Muhammad Ali and his wife Khusnia were, however, injured and they were shifted to CMH Gilgit.

According to sources at Mashabrum Transport Company, the bus was old and unfit to ply on the region’s most dangerous road, the Karakorum Highway (KKH). The bus, hired by the company from a private party, was arranged in addition to the scheduled buses to accommodate more passengers.

“Since there is rush of passengers/tourists travelling back from GB after change of weather, the transport companies try to pocket more money from the passengers through such arrangements without caring about the fitness of vehicles, training of drivers and arrangement of more than one driver for over 30 hours of travelling between Skardu and Rawalpindi,” said a driver of local bus, adding that “the local companies even force the driver to run buses without required rest which ultimately cause such incidents”.

Skardu Assistant Commissioner Chughtai, while talking to this scribe, said that an inquiry has been initiated to probe the cause of the deadly accident. He said that all the passenger buses plying on KKH would be inspected.

Numbers of deadly road accidents are reported every year on the KKH, resulting in the loss of hundreds of precious lives. Despite these repeated road accidents, the government regulatory bodies are rarely seen taking steps to address this issue.

Consumerism and Our Destitution

Consumerism and Our Destitution