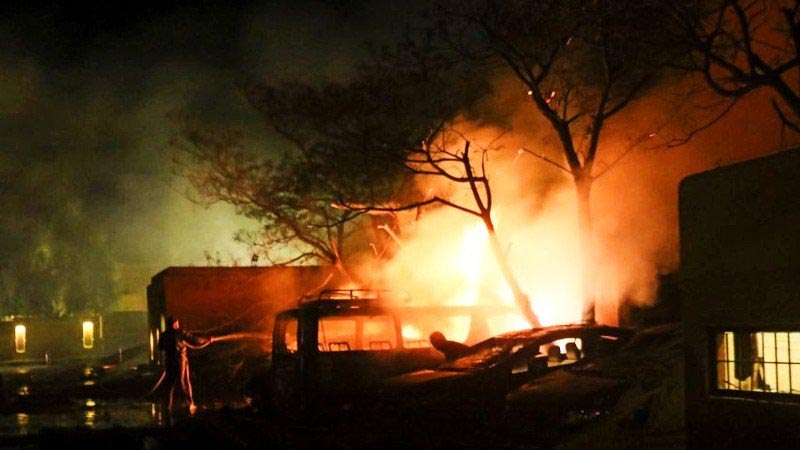 At least four people, including two private security guards, were killed and 12 others injured in a powerful blast took place in the parking lot of Serena Hotel, Quetta late Wednesday night.

Injured include two assistant commissioners of the Balochistan government, who were present in the hotel when the blast occurred, were immediately shifted to the Civil Hospital Quetta along with other wounded people. Hotel officials said that some employees of the hotel were missing.

Officials said that Chinese ambassador and other Chinese officials were staying at the hotel but were not present in the hotel when the blast took place in the parking lot.

“All guests staying in the hotel were deemed safe in the blast,” officials said.

The banned Tehreek-e-Taliban Pakistan (TTP) has claimed responsibility for the Serena hotel blast. A spokesman for the TTP said, “Our suicide bomber used his explosive filled car in the hotel.”

However, police said that initial investigation revealed that the explosive device was planted in a car which was parked in the hotel’s parking area.

After the blast many vehicles caught fire which burnt down seven cars and other vehicles. The windowpanes of nearby Balochistan Assembly, High Court and other buildings smashed due to impact of the powerful blast.

Soon after the blast police and personnel of other law enforcement agencies rushed to the explosion site and started a rescue operation after cordoning off the entire area.

“We have received four dead bodies and 12 injured in the civil hospital,” Dr Wasim Baig, spokesman for the hospital said, adding that the condition of some injured is serious.

Emergency was declared in all government hospitals after the blast.

Fire brigade was immediately reached at the blast site and controlled fire after an hour of effort. “Seven to eight vehicles were completely burnt down in the huge fire while some others were damaged.

Deputy Inspector General Police Quetta while talking to newsmen said that it was a bomb blast inside the hotel parking area. “We are investigating the nature of blast as the bomb disposal squad and the Counter-Terrorism Department has sealed the area of blast for investigation and collecting evidences.”

One person out of four was identified as Asadullah Khan while three other who were killed in the blast were not identified. The injured include Ejaz Ahmed Bilal Shabbir, Attaullah, Raja Tahir, Ifran Ahmed, Abdul Hameed, Muhammad Noor, Wazir Ahmed,Bilal Qadir, Khuda Bakhsh and Muzamil Khan.

The name of one injured is not known.

Balochistan Home Minister Ziaullah Langove, while talking to media, said that it is being investigated whether the target of the attack was the Chinese ambassador or not.

“He [the Chinese envoy] is in Quetta. I just met him… he is in high spirits and would continue his activities,” he added.

While responding to a question regarding involvement of “foreign hand” in the deadliest incident, Langove said there was nothing conclusive as yet but in the past such involvements have taken place.

He further said that no group has taken responsibility for the attack so far.

Earlier, According to Balochistan Police spokesperson, the terrorists could not enter the hotel building and detonated the bomb in the parking area.

He said that the incident could be a suicide blast, adding that the Bomb Disposal Unit (BDU) is analysing the explosive and evidence is being collected.

The spokesperson said that the terrorists behind the attack will be brought to justice. “They cannot stop progress and development of Pakistan with such cowardly act.”

According to rescue sources, the injured have been shifted to a local hospital where condition of two is said to be critical.They said that at least seven vehicles have also been completely destroyed during the explosion.

While sharing the details of the explosion, Deputy Commissioner Quetta Aurangzeb Badini said that two assistant commissioners are among the injured. “The wounded are being given the best treatment by health department,” he wrote on his official Twitter handle.

It is reportedly a VBIED+SB blast in which 12 people got injured and 04 have succumbed to their wounds.
02 Assistant Commissioners are also among the injured.
The wounded are being given the best treatment by health department.

The provincial police chief reached the blast site. The affected area has been cordoned off and an investigation is underway.

Balochistan Chief Minister Jam Kamal Khan, while condemning the incident, sought the report of the incident from police officials.

He said that no one will be allowed to disturb the law and order in the province, adding that the “entire nation is united to eradicate the scourge of terrorism”.

The chief minister also directed the security forces to provide foolproof security to the province and urged health authorities to give best medical facilities to the injured.

He also expressed grief and sorrow over the loss of precious lives in the blast.

Information and Broadcasting Minister Fawad Chaudhry said that the federal interior ministry is in close contact with the Balochistan government and an investigation is underway.

“The government will issue a statement as soon as the nature of the blast and the damage is determined,” he wrote on his official Twitter handle.