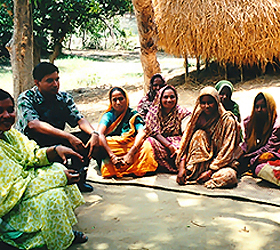 ISLAMABAD, Sep 26 (APP): Around three million poor families, enrolled under Benazir Income Support Programme (BISP) so far, are getting cash grant across the country after effective and transparent identification.At the initial stage, 2.4 million beneficiaries were registered through parliamentarians.However, the forms distribution through parliamentarians was stopped to ensure transparency and poverty survey was initiated in 16 districts on pilot basis under which 0.7 million families were found eligible for receiving cash grant, an official of BISP told APP on Wednesday.The ‘Poverty Scorecard’ of international standard is being used to ascertain the number of poor families across the country, the official said. In compliance with Aghaz-e-Haqooq-Balochistan, the poverty survey has been completed in the province and the data entry of deserving families is under process through NADRA.

The nationwide poverty survey was initiated recently by Chairperson BISP, Farzana Raja by completing a survey form of a poor family after a random “knock at door” survey in a locality of Faisalabad.

The scope of the programme has been expanded with the enrollment of recent devastating flood victims and would raise the number of registered families with BISP up to seven million and more than 35 million individuals.

The new deserving families would be included in the programme as beneficiary as soon as poverty survey was completed in respected districts.

The survey teams of the BISP have already been sent to Punjab, Sindh, Khyber Pakhtunkhwa, FATA, AJK and Gilgit-Baltistan to complete countrywide poverty survey.

BISP is providing monthly cash grants to its beneficiaries while the initiatives of Waseela-e-Haq and Waseela-e-Huner are also initiated for small entrepreneurship and skill development enabling the under privileged segment of the society to lead a self sustained life.

Moreover, health insurance initiatives for the beneficiaries of the BISP will also be introduced soon, the official added. Keeping in view the effectiveness and transparency of the programme, World Bank, Asian Bank and US Aid are also providing funds to BISP. The programme is not only instrumental in poverty alleviation but it has also served the cause of women empowerment as only female head of a registered family is authorized to receive cash grant.

BISP is also working to improve disbursement system of the cash grant further, while Benazir Smart Cards have already been introduced in the four districts and it would be expanded to all over the country in a short span of time – APP