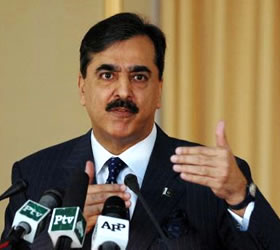 ISLAMABAD, Sept 28 (APP): Prime Minister Syed Yusuf Raza Gilani said on Tuesday that all ministries and departments needed to adopt modern governance techniques to achieve operational efficiency.Talking to Minister for Youth Affairs Shahid Hussain Bhutto and Minister of State for Industries Ayatullah Durrani, who called on him at his Chamber in Parliament House, Gilani urged them to monitor the functioning of their respective ministries and ensure efficient delivery of public service.

The Prime Minister said Pakistan had the highest ratio of youth as compared to other countries and said it was an asset for the country. He urged the Minister for Youth Affairs to design policies and programmes to utilize their potential for nation building.The Prime Minister asked the ministers to focus on the development works undertaken by their ministries. The relief phase, he said, was over and next phase of reconstruction and rehabilitation of the flood affected people was about to start.