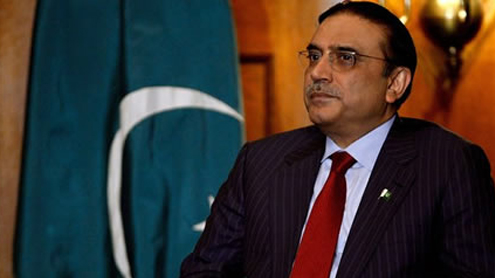 President Asif Ali Zardari on Friday said the government was considering appointing female judges in the judiciary. Addressing a signing ceremony at Aiwan-e-Sadr to conclude one million signatures campaign to raise awareness about violence against the women, Zardari said the government had taken steps for women empowerment and eliminated all forms of discrimination against them.

The president added that the government, inspired and guided by the vision of Benazir Bhutto to end the exploitation of women, passed a number of legislations to ensure the rights of women and their empowerment in the true sense. He said the present government had accorded priority to addressing the issue of discriminatory laws against women and concerted efforts were being made to eliminate the abuse of women in all its forms. President Zardari said during the tenure of Benazir Bhutto, Pakistan became signatory to the Convention on the Elimination of All Forms of the Discrimination Against Women.
Zardari invites Manmohan to visit Pakistan: President Asif Ali Zardari on Friday formally invited Indian Prime Minister Dr Manmohan Singh to visit Pakistan, saying the visit would provide an opportunity to the two leaderships to take stock of bilateral relations.

President’s spokesman Farhatullah Babar said the invitation had been extended through a letter sent today to the Indian prime minister through Pakistan’s High Commission in New Delhi. The president in his letter also suggested to the Indian prime minister to visit his ancestral hometown on the occasion of birthday celebration of Baba Guru Nanak Sahib.

Zardari said if that happened, the visit would not only be well received by the Pakistani nation but would also reinforce “our mutual desire” to promote inter-faith and inter-religious harmony. The president recalled his meeting with the Indian prime minister in New Delhi during his visit to Ajmer Sharif and expressed satisfaction over the forward movement of dialogue process and the several important engagements between the two countries. The president expressed the hope that the intensity and engagements would help promote our ties in the right direction and help realize our shared dream of a peaceful and prosperous South Asia. Zardari said it was important to sustain the process and make it more productive and result oriented. – PT

Maya Khan does it again – stir controversy, that is