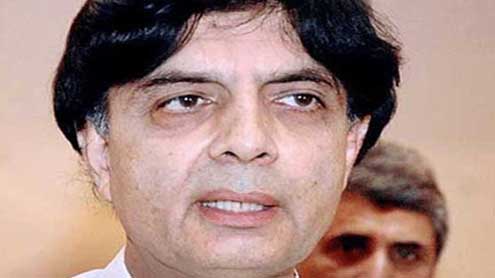 The Senate was adjourned Thursday for lack of quorum amid a standoff between the treasury and opposition over casualties in terrorism-related incidents.

The Upper House, which got underway almost an hour behind its schedule, could not undertake the business on its agenda and was adjourned for thirty minutes by chairman Nayyar Hussain Bukhari for lack of quorum, pointed out by PPP’s Islamuddin Sheikh. Prior to this brief adjournment, the House could take up the business only for a few minutes as the PPP-led opposition continued with its boycott. There were only 16 members in the House, including that of the MQM which did not go for the boycott.

Nevertheless, despite efforts the situation did not change and the chairman had to adjourn the House until Friday. Meanwhile, a consultative meeting of the PPP, PML-Q and ANP was held at the Senate House where the opposition parties decided to boycott the proceedings until Monday over what they had earlier called the interior minister’s ‘improper and un parliamentary behavior’. Alluding to the interior minister, PPP leader Raza Rabbani said that one individual wanted to hijack the entire assembly and the government. He said the matter could be resolved but the government wanted to free itself of the issues of national importance.

Later talking to reporters, Opposition Leader Aitzaz Ahsan said that senators would submit a no-confidence motion against Interior Minister Chaudhry Nisar Ali Khan if he did not retract his reply to a question about the number of deaths in terror-related incidents which the opposition believed was based on incorrect information. “We feel the government is trying to avoid questions about crucial matters and that is why it is dragging this issue which is as simple as taking back the incorrect numbers and acknowledging the mistake,” he said.

Ahsan said the opposition would not let the government move away from its responsibilities. Speaking about Nisar’s refusal to admit his mistake, Ahsan alleged that he was taking the entire government machinery hostage. He said many lawmakers disagreed with Nisar but were afraid of saying it publicly. A war of words started on Wednesday after Nisar presented figures of casualties in terrorist attacks – stats that were swiftly challenged by an ANP senator who called them a “pack of lies”. Ahsan asked the interior minister to take back the statistics and come up with the correct figure. Nisar’s response to this triggered a heated altercation among the members of the two sides. Later, the opposition, excluding MQM, walked out of the House as Nisar remained unmoved in his seat.

Leader of the House in Senate Raja Zafarul Haq, however, apologised for any rude behavior by Nisar. The interior minister had informed the House that courts had sentenced 13,223 people to death since 2002, but only 501 of them had been executed. He said 10,910 death penalties had been announced in Lahore, 1,301 in Peshawar, 541 in Karachi, 449 in Quetta and 22 in Gilgit-Baltistan. Of the 501 executions, 415 were carried out in Lahore, 64 in Peshawar, 15 in Quetta and seven in Gilgit-Baltistan. -Nation