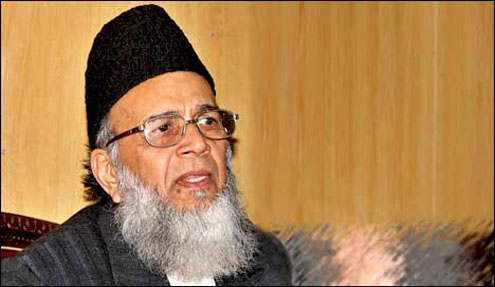 In a rare but furious reaction, Pakistan Army on Sunday lambasted head of a religious party for declaring terrorists killed in the war against terror ‘martyrs’ but denying the honorific for army soldiers killed in battle with the Taliban.

In a strongly worded statement, the ISPR asked Munawar Hassan to clear the position of his party on the issue. Families of martyred army personnel and people who lost their loved ones in the terrorist attacks demand Jamaat-e-Islamai chief to tender an ‘unconditional apology’, it said. Munawar Hassan had told a private television channel that he considered TTP chief Hakimullah Mehsud, who was killed in a US drone strike in North Waziristan, a ‘martyr’. However, when asked about his views on army soldiers who sacrificed their lives fighting Taliban, he refused to recongnise them as martyrs. “Nobody thinks that a US soldier killed in that area is a martyr. In this context, death of a person who serves US interests puts a question mark on him. If death of a US soldier is not martyrdom, how can his supporter be called a martyr,” he asked.

The army spokesmen strongly condemned the controversial remarks by Munawar and called those totally ‘irresponsible and misleading’. “Syed Munawar Hassan has tried to invent a logic based on his political convenience. Strong condemnation of his views from an overwhelming majority leaves no doubt in anyone’s mind that all of us are very clear on what the state of Pakistan is and who are its enemies,” the statement read. “Sacrifices of our shuhada and their families need no endorsement from Syed Munawar Hassan.” The spokesman said that such statements do not deserve any comments, but coming those from a party founded by Maulana Maududi was unfortunate.

“Such misguided and self-serving statements deserve no comments. However, coming from Ameer of the Jamat-e-Islami, a party founded by Maulana Maududi, who is respected and revered for his services to Islam is both painful and unfortunate,” the statement said. “The people of Pakistan, whose loved ones laid down their lives while fighting the terrorists, and families of shuhada of armed forces demand an unconditional apology from Syed Munawar Hassan for hurting their feelings,” the statement said, and added that Jamaat-e-Islami should clearly state its party position on the subject.

The controversial remarks by leader of the religio-political rightwing party triggered a serious debate in the country on a very sensitive issue. While Munawar’s comments invited a strong condemnation from rival political and religious parties as well as civil society, Maulana Fazlur Rahman of the JUI-F was seen not only endorsing the remarks but he virtually leaped a step forward. “I would call even a dog martyr if it is killed by US forces,” Fazl declared, in a move that prompted a conglomeration of ulema belonging to Sunni school of thought issue a decree. “Those who resort to violence in the name of jihad are not martyrs, but aggressors,” Sunni Ittehad Council chairman Hamid Raza Rizvi said, reading from a fatwa issued by 30 scholars and clerics affiliated with the organisation.

“Hakimullah was involved in killing of thousands of innocent people and army men. The fact that he was killed by a US drone could not purge him of his sins and he was not a martyr,” Rizvi said, as he termed statements by Munawar Hasan and Maulana Fazlur Rahman ‘rubbing salt on the wounds of heirs of over 50,000 people killed in terrorist attacks in Pakistan’. Following condemnation by military, several political and religious leaders joined a chorus of voices calling for action against Munawar. “JI should be banned and a treason case be initiated against Munawar Hasan,” said Senator Zahid Khan of the ANP, the party worst hit by the terrorist attacks.

He also demanded that Chief Justice Iftikhar Chaudhry should take suo motu notice of the statement. The Pakistan Sunni Tehreek also sided with the army and said that killers of innocent civilians and armed forces personnel can’t be labelled as ‘martyrs’. PPP Chairman Bilawal Bhutto Zardari said JI chief’s statement was tantamount to ‘adding insult to the injuries’. He demanded of the chief justice to take a suo motu. However, JI Secretary General Liaquat Baloch said his party was assessing the military statement and would respond to it after due consultation at the party level. – Dailytimes