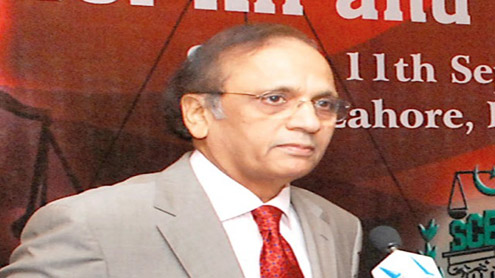 The senior most judge of the Supreme Court after Chief Justice Iftikhar Muhammad Chaudhry, Justice Tassaduq Hussain Jillani has been appointed new Chief Justice of Pakistan.

He will take oath of his office on December 12.  President Mamnoon Hussain will administer oath from the newly appointed Chief Justice of Pakistan at the President House. Talking to APP, Federal Secretary Law, Barrister Zafarullah confirmed about the notification of the new Chief Justice of Pakistan. According to biodata available on the official website of the Supreme Court of Pakistan,  Justice Tassaduq Hussain Jillani was born on July, 6, 1949. He did Masters in Political Science from Forman Christian College, Lahore and  LL.B., from the University of Punjab, Lahore.

He has participated and represented in number of international meetings, conferences, seminars and dialogues. Naming few amongst many are 3rd Malta Judicial Conference on Cross-Frontier Family Law Issue held from 24-26 March 2009 in St. Julian’s Malta; International Family Justice Judicial Conference for Common Law and Commonwealth Jurisdictions at Cumberland Lodge Windsor, England from 4th to 7th August, in 2009, the ‘Conference on Religious and Cultural Freedom under a Bill of Rights’ (13-15 August, 2009) organized by the University of Adelaide, Canberra, Australia World Justice Forum-II from 11-14 November, 2009, in 2010, 10th Congress International Association of Supreme Administrative Jurisdictions held in Australia from 7th to 11th March, 2010 and the International Judicial Conference on Cross-Border Family Relocation held in Washington, D.C. from 23-25 March, 2010.

He was awarded ‘Key of the City of Detroit (Michigan)’ by the Mayor at a function, on 12th of October, 2007, conferred ‘Honorary Doctorate in Humane Letters’ at a special Convocation held in Southern Virginia University, Washington, he was conferred the Honorary Chair by the American Bar on its ‘The World Justice Project’ an Initiative to promote the rule of law the world over. In July, 2008, he was invited by the American Bar Association to receive the ‘2008 Rule of Law Award’ on behalf of those Judges of Pakistan who demonstrated courage in upholding the ‘Rule of Law’ in the country. He is Co-chair of the Hague Conference Mediation Committee in Family International Law. -App