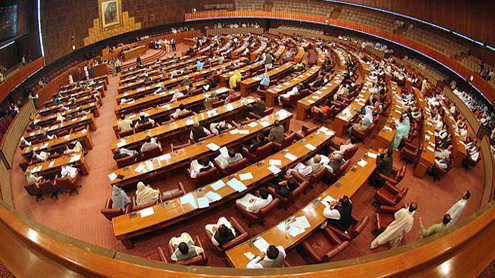 In order to deal with the menace of terrorism, the government has decided on a major policy shift under which attacks from militants would be met with an appropriate military response, Interior Minister Chaudhry Nisar Ali Khan told the National Assembly on Wednesday. Formally unveiling the document of the country’s national security policy in the House, Nisar said the direction was agreed upon unanimously, adding that the government had consulted with all political forces for its formation.


The minister said only the Muttahida Qaumi Movement (MQM) had assisted the government in policy formation and thanked the party for its recommendations. Nisar further said that none of the provinces had contributed to policy formation. Nisar said developing a political consensus was imperative to deal with terrorism, adding that it was not appropriate to score points on the issue when it was not just peace but the state’s existence at stake. He said the policy would be improved step by step and its implementation and effectiveness would be reviewed during the next six months. The minister said the policy comprised of three parts, one of which was secret.   Dwan