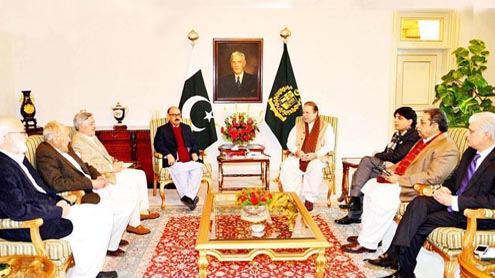 The negotiators representing the federal government and the Tehreek-i-Taliban Pakistan (TTP) met at the Prime Minister House Thursday in wake of the government’s decision to form a new committee to interact with the Taliban. Interior Minister Chaudhry Nisar Ali Khan, who is rumoured to be a part of the new government committee, also attended the meeting. Maulana Samiul Haq, Professor Ibrahim and Maulana Yousuf Shah were representing the Taliban committee.

The meeting discussed ways of furthering peace talks between the government and the Taliban. Speaking to media representatives after the meeting, Sami said Prime Minister Nawaz Sharif had appreciated the performances of both the negotiating teams, adding that the meeting had been a positive one. He said both the sides had agreed to further peace talks and the prime minister was determined that the situation would not call for an operation.

Sami said a strategy would be formed in a day or two in order for the negotiating team to travel to Waziristan, adding that he would also undertake the journey. He underscored that negotiators from both sides should collaborate in order to identify elements trying to sabotage the peace process and expressed the hope that all matters would be resolved in a peaceful manner while underscoring. Dwan