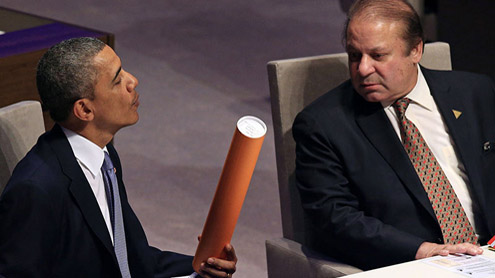 Pakistan assured world community that it is considering ratification of the 2005 Amendment to the Convention on Physical Protection of Nuclear Material (CPPNM) and are actively conducting a review to meet its various requirements. Pakistan has also called for its inclusion in all international export control regimes, especially the nuclear suppliers group and international treaties and forums should supplement national actions to fortify nuclear security. “Pakistan’s nuclear security is supported by five pillars – a strong command and control system led by the National Command Authority (NCA); an integrated intelligence system; a rigorous regulatory regime; a comprehensive export control regime; and active international cooperation,” Prime Minister Nawaz Sharif said while addressing the 3rd Nuclear Security Summit here on Tuesday.

The two-day summit is being attended by leaders from 53 countries, United Nations, European Union, International Atomic Energy Agency and Interpol. Prime Minister Sharif is accompanied by Special Assistant Syed Tariq Fatemi, and Foreign Secretary Aizaz Ahmad Chaudhry for the trip. The first Nuclear Security Summit was held in Washington in 2010 and the second in Seoul in 2012. The summit is aimed at promoting nuclear security through voluntary national actions and international cooperation. The prime minister will also be one of the keynote speakers at a meeting on the future of the NSS process on March 25.

During Monday’s speech, Sharif said Pakistan attaches highest importance to nuclear security because it is directly linked to the country’s national security. “Pakistan is a responsible nuclear weapons state. We pursue a policy of nuclear restraint, as well as credible minimum deterrence,” Nawaz Sharif remarked. “Looking back, we can say with confidence that our decisions and commitments have spurred national action, promoted international cooperation and fostered nuclear security culture,” the prime minister said. On prevention of nuclear terrorism, he remarked, “We all want nuclear security, which is a national responsibility and a global priority.”

Nawaz Sharif called for taking measures to secure all nuclear facilities and materials and prevent any perceived nuclear terrorist threat. But at the same time Pakistani leader underlined the importance of nuclear technology for hospitals, industry and research and said, “We should be vigilant about radiological threats.” “Our region needs peace and stability for economic development that benefits its people. That is why, I strongly advocate nuclear restraint, balance in conventional forces and ways to resolve conflicts,” Nawaz Sharif said.

Sharif said Pakistan is ready to share its best practices and training facilities with other interested states in the region and beyond. “We have also deployed radiation detection mechanisms at several exit and entry points to prevent illicit trafficking of radioactive and nuclear materials.” Highlighting Pakistan’s energy deficiency, he said it is one of the most serious crises facing Pakistan. “As we revive our economy, we look forward to international cooperation and assistance for nuclear energy under IAEA safeguards,” he said. The prime minister called upon other world leaders to consolidate progress made so far on nuclear security. “We must also maintain our political will, avoid duplication of effort and broaden our membership to gain more acceptance for our decisions,” he added. -Dawn