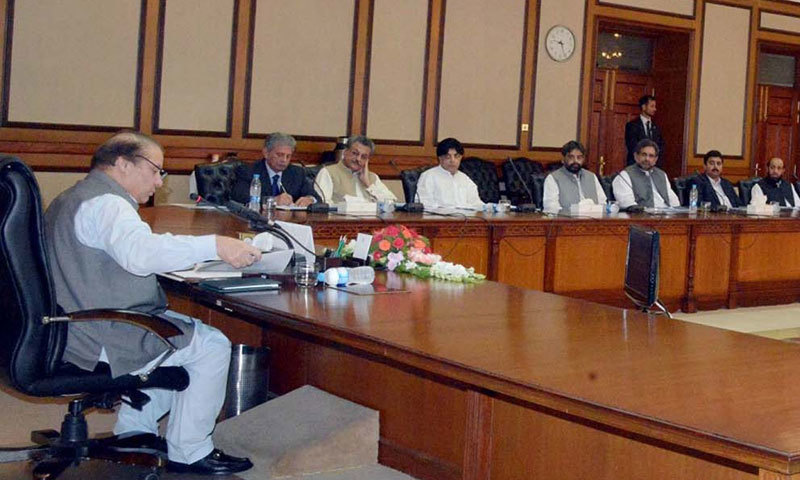 The Lahore High Court advised the federal government on Tuesday to quit in the wake of its failure to maintain public peace, particularly for the past four months. It even asked the government to give others a chance to serve if it could not deliver. A full bench of the court, headed by Justice Khalid Mahmood Khan and comprising Justice Shahid Hameed Dar and Justice Mohammad Anwarul Haq, is hearing a number of petitions against prolonged protests by opposition parties, especially the Pakistan Tehreek-i-Insaf and Pakistan Awami Tehreek. The petitioners sought the arrest of PAT chief Dr Tahirul Qadri because he had yet to obtain bail in at least 40 cases registered against him in different cities of Punjab. One of the petitioners sought initiation of proceedings against PTI chief Imran Khan and Dr Qadri under Article 6 of the Constitution for their acts which, he said, fell within the ambit of treason. Another petitioner requested the court to order the government to ensure protection of citizens and traders in Lahore during a shutter-down strike in the city called by the PTI for Dec 15.

At the outset of the hearing, the court observed that the government appeared to have been very weak and helpless during the whole episode of protests. “This is the time to wake up. Where is public peace for the past four months?” Justice Shahid Dar wondered. The government did not want to show its muscles, Additional Attorney General Naseer Ahmad Bhutta said when the court questioned the existence of the government. The court said life in cities would be paralysed if the government did not show seriousness towards the protests. Recalling the fall of Dhaka, Justice Khalid Khan said the government should not keep the nation in dark. Such a mistake in the past had resulted in the loss of half of the country, he added. The court agreed with the contention of Advocate A.K Dogar, the counsel for a petitioner, that the country was passing through “very bad state of affairs” and the situation could lead to anarchy.

The bench expressed dismay over the federal government’s failure to submit its reply to the petition seeking arrest and treason proceedings against the respondent protesting leaders. It gave the government last chance to submit the reply next week.The court decided to proceed ex-parte in the treason petition to the extent of Dr Qadri since no one had appeared on his behalf.

Despite issuance of a notice, the respondent (Dr Qadri) was not showing interest in the court’s proceedings, it regretted. A lawyer, representing a local leader of traders, informed the court that the government had yet to come up with any effective plan to protect the people of Lahore if the PTI went ahead with its plan to enforce a shutdown on Dec 15. The court directed the federal and Punjab governments to submit on Wednesday a plan for maintenance of law and order in Lahore during PTI’s protest.