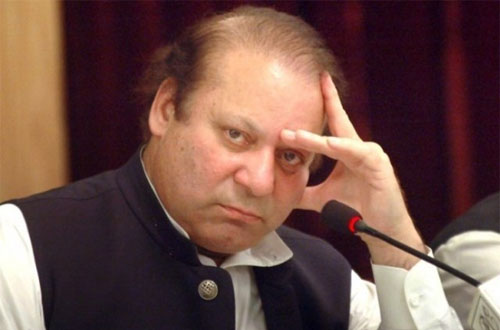 In a statement attached to the report, Phelim Kine, the deputy Asia director at the New York-based HRW, regretted that “the Pakistan government is failing at the most basic duty to protect its citizens and enforce rule of law”. The Pakistan government did little in 2014 to stop the rising toll of killings and repression by extremist groups that target religious minorities,” he added. Talking to Dawn, HRW consultant in Pakistan Saroop Ijaz said that in its 656-page report the HRW had reviewed human rights practices in more than 90 countries. He said the report had been launched globally on Thursday and the main event was held in Beirut. The report has termed 2014 “a tumultuous year” for Pakistan in which “sectarian attacks continued with impunity, military operations in North Waziristan displaced more than one million people, and massive floods wrought devastation in Sindh and Punjab provinces”. “Violent attacks on religious minorities, fostered in part by the institutionalised discrimination of the blasphemy laws continued,” says the Pakistan chapter of the annual report. “Sectarian violence, particularly attacks against the already beleaguered Shia community, continued to claim a high toll in 2014,” the report says, adding:

“The militant group Lashkar-i-Jhangvi continued attacks on Shia-Hazaras in Balochistan and the government failed to successfully prosecute and imprison suspects, in part due to sympathy for the group within the security forces.” In June, twin suicide attacks in Taftan near the Pak-Iran border killed 24 Shia pilgrims and injured 18. The Sunni militant group Jaish-ul-Islam claimed responsibility for the attack, but the authorities have not made any arrest. According to the HRW, Karachi remained a “hotbed” of sectarian violence, with at least 750 sectarian targeted killings occurring in the city from September 2013 to September 2014. It also claims that since 1990 at least 60 people have been murdered after being accused of blasphemy. At present, 17 people convicted on blasphemy charges are on death row; with 19 others serving life sentences. In March 2014, a court in Lahore sentenced Sawan Masih to death for committing blasphemy. In April, those allegations prompted a 3,000-strong mob to attack a Christian residential community in Lahore and torch hundreds of houses. “Police arrested Masih, but failed to otherwise intervene.”

On May 7, gunmen killed Rashid Rehman, a well-known human rights lawyer, in apparent retaliation for representing people accused of committing blasphemy. At the time of his murder, Mr Rehman was representing Junaid Hafeez, a university lecturer facing blasphemy charges, and had received death threats. In April, a court in Toba Tek Singh sentenced to death a Christian couple, Shafqat Emmanuel and Shagufta Kausar, for allegedly sending “blasphemous” text messages. In November, a mob beat to death a Christian couple after they allegedly committed blasphemy by burning pages of Holy Quran. Their bodies were later burned in the kiln of the factory in which they worked. In July, a mob in Gujranwala burned down houses of members of the Ahmadi community, killing three people and injuring eight others after the victims had been accused of committing blasphemy. “Violence against women and girls, including rape, murder through so-called honour killings, acid attacks, domestic violence, and forced marriage, remained routine. “Pakistani human rights NGOs estimate that there are about 1,000 honour killings every year,” the report says. In a notorious case, 25-year-old Farzana Parveen, who was pregnant, was stoned to death in May in front of a Lahore court by family members who were angry that she had married without their permission.

Perpetrators of the killings often escape punishment because law enforcement officials routinely drop the cases if the victims’ families offer “forgiveness”. Women who are members of the religious minorities are particularly vulnerable. A report by the Movement for Solidarity and Peace in Pakistan found that at least 1,000 girls belonging to Christian and Hindu communities are forced to marry Muslim men every year. BALOCHISTAN: The human rights situation in Balochistan remained “abysmal”, says the report. “Despite the May 2013 election of a civilian government, the military has retained all key decision-making functions in the southwestern province and blocked efforts by civil society organisations and media to cover ongoing violence there,” according to the HRW. Ongoing rights concerns in Balochistan province related to enforced disappearances, extrajudicial killings and torture remained unaddressed. Lack of government’s response to continuing abuses by the security forces in Balochistan fostered a longstanding culture of impunity,” says the HRW. Despite rulings from the Supreme Court in 2013 as well as recommendations from the UN Working Group on Enforced or Involuntary Disappe­arances in 2012, the government has failed to meet its obligations under the Constitution and international law prohibiting enforced disappearances.

There were no signs of improvement vis-a-vis accountability of law enforcement agencies in 2014. In June, one of the most egregious incidents of excessive use of force against political protesters occurred in Model Town, Lahore, when police fired without warning on supporters of the Pakistan Awami Tehreek (PAT), whose workers had tried to stop demolition of security barriers erected in front of the PAT headquarters. Authorities confirmed the deaths of at least eight PAT members. The report has termed the Protection of Pakistan Act (PPA) an “extremely broad and ambiguously worded document” that grants the security forces “broad powers to implement preventive detention and carry out arrests without warrants”. “Such provisions can easily provide legal cover for abuses by law enforcement agencies and open the door for the violation of fundamental rights to freedom of speech, privacy, peaceful assembly, and a fair trial,” it says.

“The PPA violates the right to fair trial by shifting the onus of proof on the accused in certain circumstances, and granting powers of arbitrary arrest and preventive detention to the security forces,” the report says. The report has also talked about the political crisis in Pakistan. “Political instability reached a crisis point in August and September as prolonged and violent opposition protests threatened to undermine gains achieved by the country’s first civilian transfer of power following the May 2013 election of Nawaz Sharif as prime minister,” it says. The protests in Islamabad, led by Imran Khan and Dr Tahirul Qadri, who called for Mr Sharif’s resignation and the formation of a new government, prompted violence by both protesters and the security forces which resulted in at least three deaths and hundreds of injuries.