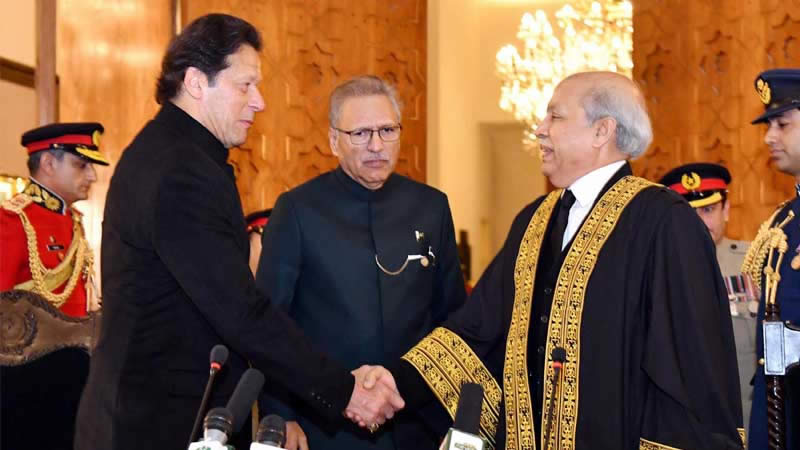 Chief Justice of Pakistan Gulzar Ahmed on Monday raised questions over the size of the federal cabinet that includes a large number of unelected advisers and special assistants as he once again expressed dismay over the federal government’s measures to deal with coronavirus pandemic.

“Advisers have been given status of the federal ministers but despite this larger number of advisers, there is no betterment in the federal government performance to deal with the pandemic,” the CJ remarked while heading a five-judge larger bench hearing a suo motu case on COVID-19.

“What is the point of a 49-member cabinet?” he asked.
When he came to power in August 2018, Prime Minister Imran Khan had expressed his resolve to run the affair of his government through a small cabinet. However, following the tradition of the previous government he continued to increase the size of his government in coming months.

Without naming anyone, the CJ noted that allegedly corrupt individuals have been inducted in the cabinet. He wondered how despite having a number of advisers, the PM is ignorant about the issues related to subsidies.

Attorney General for Pakistan (AGP) Khalid Javed Khan said Prime Minister Imran Khan is an honest person; is working hard and should be given opportunity to run the government affairs.

The CJP, however, noted that a 10-member cabinet is enough to run the government affairs.

The top judge was also visibly upset over the recent reshuffle in the cabinet after an inquire report compiled by an Federal Investigation Agency (FIA) led committee revealed that top politician belonging to the ruling PTI including a federal minister were among the beneficiary of a recent sugar crisis.

The larger bench again raised question about competence of Special Assistant to the Prime Minister (SAPM) on Health Dr Zafar Mirza. The CJ also referring to the alleged smuggling of surgical masks to other countries said the court is not satisfied with Dr Mirza’s performance.

He said the government should remove, adding that the court would dictate the same in its order.

However, the AGP intervened and requested the bench to show restrain as, according to him, the removal of Dr Mirza at this time will be dangerous. He said the FIA is probing into alleged smuggling of masks. He assured the court that its concerns will be conveyed to the prime minister.

On the AGP’s request, the SC did not order the government to remove the SAPM.

Another member of the bench, Justice Umar Ata Bandial said there is need of leadership to maintain unity in the country, adding that provincial governments need support in the prevailing situation.

The bench also questioned why the parliamentary session is not being summoned to discuss the situation that has emerged after COVID-19 pandemic. The court referred to Article 54 which says the president may summon a joint session of Parliament to discuss such emergency situation.

The CJ also referred to the SC’s earlier order in which it directed the federal government to carry out legislation on COVID-19. He wondered why the parliamentarians are avoiding a parliamentary session.

Another judge, Qazi Muhammad Amin Ahmed, said the political system may derail due to ongoing crisis. However, he made it clear that they cannot pass direction for summoning of the Parliament.

The AGP said a high-powered meeting will be chaired by the PM on COVID-19.

However, the CJP said the cabinet has become ineffective, adding that the government just provided data to the court about medical facilitates but it did not tell about its plan of action to deal situation.

The AGP said the court seemed to be suggesting that there was anarchy in the country. The bench clarified it was just giving guidelines.

The bench also questioned the Sindh government decision to lockdown 11 union councils in Karachi. It wondered whether the government had evolved any plan to distribute ration among the needy people in those areas.

The court in its order noted that situation is serious in Sindh where the provincial government has no plan to deal with the pandemic. The court also set aside Punjab directive to restrict intra province movement without clearance certificate on COVID-19.

The SC once again sought comprehensive details from federal and all provincial governments regarding their plan to deal situation after COVID-19. Hearing of the case was later adjourned till next Monday.

Talking to The Express Tribune, a senior PTI lawyer admitted that a number of unelected individuals are occupying key portfolios but there is no significant improvement in the governance. He said Prime Minister Imran Khan needs to rely on the elected members rather than unelected technocrats.

“I think we should support the SC’s stance that elected representatives should be relied on,” he said.

All Borders to Remain Closed for Two More Weeks